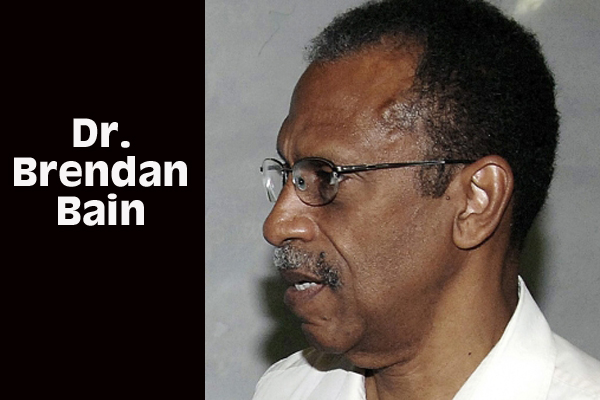 The University of the West Indies, the region’s premier tertiary level institution, today issued a statement announcing that it has terminated Dr. Brendan Bain, Professor of Community Health at the University of the West Indies (UWI), Coordinator of the UWI HIV/AIDS Response Programme (UWI HARP), as Director of the regional coordinating unit of the Caribbean HIV/AIDS Regional Training Network (CHART) at UWI—amid a hailstorm of complaints from the LGBT community who said that his testimony in the Belize case has caused a loss of confidence in him.

The well-known Jamaican professor was this month the subject of an unprecedented institutional trial triggered by members of a region-wide LGBT community, which has for months been calling for his appointment to be scrutinized in light of statements he made to the Belize Supreme Court as expert witness in a high profile challenge to the nation’s buggery laws.

“While the University recognizes the right of Professor Bain to provide expert testimony in the manner he did, it has become increasingly evident that Professor Bain has lost the confidence and support of a significant sector of the community which the CHART program is expected to reach, including the loss of his leadership status in PANCAP, thereby undermining the ability of this program to effectively deliver on its mandate. It is for this reason that the University of the West Indies has decided to terminate the contract of Professor Bain as Director of the Regional Coordinating Unit (RCU) of the Caribbean HIV/Training (CHART) Network,” said a statement released today by UWI.

UWI notes that the law dates back to colonial times, 1861, and added that, “Many authorities familiar with the brief presented believe that Professor Bain’s testimony supported arguments for retention of the law, thereby contributing to the continued criminalization and stigmatization of MSM [homosexuals]. This opinion is shared by the lesbian, gay and other groups who are served by CHART.”

UWI also claimed that, “The majority of HIV and public health experts believe that criminalizing men having sex with men [homosexuals] and discriminating against them violates their human rights, puts them at even higher risk, reduces their access to services, forces the HIV epidemic underground, thereby increasing the HIV risk.”

Bain noted in his testimony during the Belize case, almost two years ago, that the risk of contracting HIV is significantly higher among homosexuals. He pointed to data signaling a higher disease risk among homosexuals, pointing to higher incidences of STDs and cancer and noted the economic cost attached.

The Jamaican media has been reporting that 33 to 35 groups, including UNIBAM, have petitioned the University of the West Indies’ (UWI) vice-chancellor, E. Nigel Harris, calling for the institution to review Bain’s headship of CHART, in light of his testimony in the Belize case. They allege a conflict of interest on the part of Bain, a member of the church community.

Apart from UNIBAM, the other groups which sent the UWI petition letter include J-Flag, Jamaicans For Justice, Caribbean Forum for Liberation and Acceptance of Genders and Sexualities (CariFLAGS), Jamaican Youth Advocacy Network, Jamaica Youth Theatre, Hannah Town Parenting Group, Women Against Rape and Stand Up for Jamaica.

The groups wrote Harris in January, but wrote him again late April, having not received a reply to their first letter. Consequently, UWI set up an advisory committee to look into his suitability to retain his current position at CHART.

Evangelicals have also written Harris, urging that the university demonstrates its “unequivocal commitment” to the academic freedom and freedom of expression, which it describes as “cherished principles.” The Jamaica Association of Evangelicals has urged UWI to implement a policy to protect all employees and students from intimidation.

“The LGBT lobby groups have shown their true colors. Instead of attempting to soundly refute the professor’s claims — assuming that they could — they want him to shut up. He did not quote the Bible, the Qu’ran or the Buddha, but used science,” wrote Hal Lewis, in a letter to the Jamaica Observer.

“Are gay men more at risk for becoming infected with HIV or not? In fact, worldwide, men who have sex with men are more likely to become infected with HIV than the general population, and this is true regardless of the income level of the country,” wrote Hal Lewis in a letter to Jamaica Gleaner.

The plight of Dr. Bain comes to the fore just as the US held a celebration on May 17 in commemoration of IDAHOT – International Day Against Homophobia and Transphobia – here in Belize. On that occasion, Belize’s First Lady, Kim Simplis-Barrow delivered a statement to the gathering via video, saying that LGBT persons are deprived of their most basic rights.

“Lesbian, Gay, Bisexual and Transgender persons continue to be subjected to terrible violence. They are deprived of their most basic rights, most importantly, the right to security of person because of their sexual orientation and gender identity,” Barrow said.

She added that hate crimes and hate speech against the LGBT community continue to rear its ugly head—even here in Belize.

Barrow also claimed that, “…we have seen cases in Belize where they have been physically attacked or subjected to insults without provocation,” and added, in comments welcomed by the LGBT community, that, “No one deserves the inhumane treatment that many LGBT persons suffer. They are often in fear, not only for their physical safety but for their lives, and that is no way to live.”

Bain’s supporters have been quick to note that the professor’s report was based on science – contrary to suggestions that he was biased for religious reasons.

Bain also has the support of his peers in the profession, who hold his work in very high regard. Dr. Shane Alexis, president of the Medical Association of Jamaica (MAJ), has issued a statement asserting that MAJ has publicly recognized the significant contribution to medicine which Professor Bain has made, and calling for the emphasis to be put on the facts, rather than the emotions or sentiments which the facts may evoke.

In supporting Dr. Bain, Alexis said, “His pioneering work in Jamaica and the region on the prevention, diagnosis and treatment of HIV/AIDS since 1983 has been to the benefit of many doctors, thousands of patients and their families irrespective of their affiliation and status. In his early work on HIV/AIDS when the stigma of the illness was at its strongest, Professor Bain helped us all to better understand the illness and to help the most vulnerable who were infected.”

Alexis added that, “As an expert witness, his testimony to the court is a duty to the Court, and, is the opinion of the expert himself. He is therefore obliged to discharge his testimony truthfully and professionally.”

However, the association also looked at the wider implications for other medics who may be called to provide testimony before the court.

“Many doctors are asked to give expert testimony to the courts, both locally and internationally, on a variety of areas. We sincerely hope that our responsibility under the law to the court is not under any form of attack,” Alexis stated.

He concluded saying that MAJ is closely watching the developments at the University of the West Indies, and expects that the principles of due process and transparency will be followed to arrive at a conclusion.

Bain has declined comment to the press, pending the outcome of the review. We were told when we tried to reach Bain that the situation at UWI is still unclear.

Jamaica media reports also indicate that the LGBT community is calling for UWI to effect policies to “protect lesbian, gay, bisexual, transgender and intersex staff and students from discrimination.”

HIV, homosexuality and prison in Belize

In his report submitted as part of the UNIBAM proceedings, Dr. Bain also referenced a report by Belizean health professionals, highlighting the plight of incarcerated men at the Central Prison. In a paper titled, “HIV seroprevalence and associated risk factors among male inmates at the Belize Central Prison” (2009), Ethan Gough and Paul Edwards reported that, “Of the 623 inmates in the sample, 25 tested positive for HIV-1/2 antibody for [HIV] prevalence of 4.0% (95% Confidence Interval 2.7, 6.0). After adjustment for confounding, HIV serostatus was positively associated with male-to-male sexual activity outside prison, age, and district of residence before current incarceration.”

They concluded that the prevalence of HIVH in the Central Prison was almost twice that estimated for the adult population of Belize in 2004 (2.4%), and that male-to-male sex outside prison is likely more important to the male inmate population in Belize.

“Behaviors that are helpful to individuals and to the community are to be encouraged. On the other hand, there are instances in which private behaviors result in considerable public cost due to illness, with accompanying loss of productivity and social disruption and the prospect of premature death. The public cost of these private behaviors must be acknowledged and actively reckoned with,” Bain argued.

“The risk to MSM and their intimate sexual partners is not just to their physical health. The adverse physical and physiological consequences of STIs (including HIV) in MSM create significant and avoidable financial costs to individuals, households and governments. These important considerations must be included when considering whether to give public approval to risky behaviors such as are often practiced by MSM,” he stated.

A May 9, 2014 report newly released by the US Centers for Disease Control (CDC) reports, for example, that, “Recent years have shown an accelerated increase in the number of cases, with the largest increases occurring among MSM.”

The CDC report added that the increase in syphilis among homosexuals is a major public health concern, particularly because syphilis and the behaviors associated with acquiring it increase the likelihood of acquiring and transmitting HIV.

In July 2013, the Belize Ministry of Health published the TB, HIV/AIDS & other STIs Programme Report, which noted that, “HIV is a concentrated epidemic in the ‘men who have sex with men’ group.” It also pointed out that the majority of those being diagnosed in 2012 were already showing up with advanced HIV infection, and 65% of those who died from HIV in 2012 were males. The report said that HIV has become “a concentrated epidemic” within the male homosexual community. It cited a Behavioral Surveillance Survey of 2012 for two at-risk populations: “female sex workers” and “men who have sex with other men.” The ministry reported that the prevalence of HIV among the homosexuals tested was 13.8% and 0.9% of the female sex workers tested, compared with an estimated 2.3% in the general population.