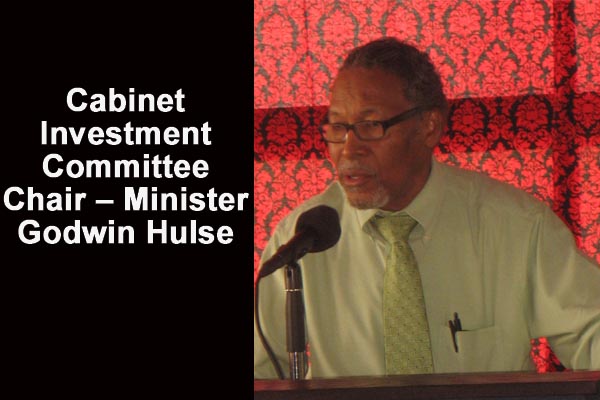 Norwegian project promoted as “win-win” for the South

Norwegian Cruise Line today announced that it has purchased approximately 75 acres in Southern Belize for the planned development of a US$50 million eco-friendly cruise destination.

Minister of Labour, Local Government, Rural Development and National Emergency Management and Immigration and Nationality Godwin Hulse, said, “We are committed to ensuring that every investment that comes to the table is well analyzed, well documented and well researched, so that we dispense once and for all with those innuendos and sayings that there are things under the table and people have deals –we don’t want any negative to surround any potential investment that comes to this country – but to ensure that it is upfront and transparent, and we can look you in the eye, and say ‘Yes – this is a good thing!’”

“It is not, as some would say, that we are all lying down, ‘licky licky,’ et cetera. We are here to protect the interest of the Belizean people – so that is why we were brought to Government and that is what we are going to do and we are going to do so successfully. No ifs, maybes or buts about it,” Hulse added.

The Chief Executive Officer in the Ministry of Trade, Investment, Promotion, Private Sector Development and Consumer Protection, Mike Singh, who swears that he has no private interest in the project, previewed the features of the MoU and noted that this would be the only cruise passenger port in southern Belize – Stann Creek and Toledo – for the next 25 years.

Prime Minister Dean Barrow indicated in Parliament last week that the owners at the Big Creek Port had also said that they would have wanted to establish a cruise port; however, he indicated that a bird in the hand is worth two in the bush, so to speak.

Addressing criticism that the deal is skewed in favor of the investor, Norwegian Cruise Line, Singh said that 25 years of exclusivity was calculated to be the length of time required to give Norwegian a reasonable assurance, that it would be able to recover its investment.

“There’s been all sorts of rumors about these runaway concessions that are above what everybody gets. The Fiscal Incentives Program is available to all tourism developers,” said Singh.

Although the Harvest Caye project is said to have the potential to generate up to 1,000 jobs: direct and indirect jobs, only construction jobs would be available for the first two years. However, Murphy threw in a sweetener at today’s press conference: He announced that Norwegian would commence later this year a crew recruiting program for Belizeans to work on their ships. Murphy said that they have checked to see how many Belizeans are among the thousands who make up their crew, and they were able to account for only 10.

It is evident that the Government of Belize is sold on the economic benefits of the project; however, as is usually the case with projects of such scale, environmental concerns also tend to be paramount.

Of note is that Norwegian’s first proposal, for a port at Crawl Caye, was turned down because it is included in portions of offshore Belize designated with World Heritage Site status.

However, the new location had already gotten clearance for a mega-resort. Norwegian said that not only did they buy the island – they bought the company which owned the island as well.

Asked how he would respond to those who see a compromise in the decision by the Government to accept an amended Environmental Impact Assessment (EIA) – which would be a revision of the EIA approved for a resort development to Krystal Sea Limited four years ago, in 2009 – and not demand a brand new EIA, Hulse said under the terms of the MoU, environmental clearance is required before the project can proceed. He said that portions of the former EIA are still relevant for the project.

“The amendment means that it is going to be adjusted to suit what is now being done; and there is absolutely nothing wrong with that,” said Hulse.

Amandala has been informed that Joe Doto, President / Principal, Oceanside Solutions LLC, has been contracted to work on the amended EIA. According to Darley, Doto is working in collaboration with a Belizean to complete the report.

The land, called Harvest Caye, is made up of two adjoining islands in the Stann Creek and Toledo districts that had previously been approved for a resort development with an air strip, Norwegian notes.

Norwegian added that its vision is to create a world-class cruise destination, consisting of two locations: an island destination with docking/tendering facilities and a mainland connection point for inland tours.

“Major components of the project are anticipated to include a floating pier, island village with open-air structures on raised platforms, marina, transportation hub for tours to the mainland, a lagoon for a variety of water sports and a relaxing beach area,” the company said, via a press release.
Under the MoU, no cruise calls from the Belize City port would be diverted to the South – not even Norwegian’s, said Hulse.

In initially lobbying for the project, though, Norwegian Cruise Line had indicated that the main impetus for wanting to invest in the new location was to improve the experience of their customers who don’t take tours but stay in port.

In light of the Government’s insistence there would be no diversion from the Belize City site, we asked Murphy to indicate what the way forward would be.

He said that last year, their cruise line brought 98,000 passengers to Belize City – which, he said, represents only a small percentage of the 600,000 cruise passengers which came to Belize.

“We know that other cruise lines are waiting to take those spots,” said Murphy, asserting that the majority of their passengers will go to Harvest Caye.

According to Murphy, they expect to be active in Belize 150 days a year. He said that head tax revenues accrued to the Government of Belize – of which US$4 out of every US$7 charged per tourist goes back to the company and US$3 goes to the Belize Tourism Board and the Protected Areas Conservation Trust in Belize – would quadruple once the project comes on-stream.

Hulse said that the agreement—which Prime Minister Dean Barrow has said is neither legal nor binding—foresees a dollar increase every five years for the next 25 years; but the split of any increase would be 50-50 between Government and the company.

Murphy also indicated that whereas the initial plan is to bring one of their regular ships – with capacity of 2,000-plus passengers, their vision is that their bigger and newer models – Breakaway and Getaway, which take over 4,000 passengers – would someday dock at the Southern port.

That plan is not likely to sit well with those who are advocating for the Government to stick with the pocket tourism model it had originally set for the south, which calls for only small ships with a few hundred tourists.

Addressing concerns that the level of cruise tourism which the parties plan to introduce in the south will hurt overnight tourism, Director of the Belize Tourism Board (BTB), Laura Frampton, said that any improvement they make to the tourist sites, in line with the new cruise port – improvements to the roads and to the infrastructure – will also benefit the overnight tourism product.

She also said that there is no study that has been produced or no evidence to indicate that cruise tourism negatively impacts overnight tourism.

Frampton indicated that they do plan to undertake stakeholder meetings to address public concerns and to see how line agencies can benefit from the project.

She also said that they will aim to ensure that the visitor satisfaction remains high.

“We have to be prepared and we have about twenty-four months to get prepared for this project and that requires that we will have the suitable infrastructure in place. We will have our capacity limits in place and, in fact, we will be working along with the National Institute of Culture and History to ensure that we have those capacity limits in place—at least for the archeological sites and with the other park managers for their sites,” Frampton said.

The BTB director said that “a tremendous among of work” is being done to upgrade visitor experience in Belize. She pointed to the sustainable tourism program and infrastructure improvements in the Fort George area.