On The Lighter Side? 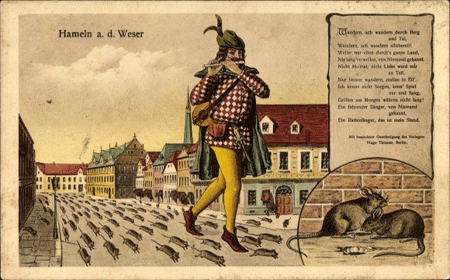 The Ashcroft/BTL/Belize Bank multimillion dollar fiasco brings to mind a story from my childhood. Fill in the characters as you will, reader; interpret it as you will; take from it what message you will. Hopefully it provides a “neutral” setting for you to come to grips with some truths about Belize and take responsible action where needed.

With the silos full of corn and wheat came mills for grinding the corn and wheat, bakeries for baking bread and cakes, shops for selling the bread and cakes and, of course, people for eating. The people were so prosperous and busy loading and unloading, milling, baking and eating that they didn’t notice all the litter and rubbish that was accumulating in the streets and, of course, with the rubbish came the rats.

Something had to be done.
The people of Hamelin made their way to the Town Square and knocked on the big brass doors of the Town Hall and demanded to know what the Lord Mayor was doing about the rats. The Lord Mayor appeared on the balcony in his black robes and gold chains and made a speech.
“Good citizens of Hamelin you may rest assured that what needs to be done is being done. Don’t you worry about that.”

The good citizens of Hamelin weren’t too sure about that but they went home to their houses to see what would be done. But nothing was done. There was just as much rubbish in the streets and just as many rats in the mills, the bakeries, the shops and the houses. In fact there were more rats. The rats kept growing and breeding and breeding and growing and eating and eating and eating. They ate anything they could get their teeth on. Nothing or no one was safe from the rats.

Finally the Lord Mayor appeared on the balcony in his black robes and gold chains and announced somewhat nervously that he had a definite plan of action.

“Good citizens of Hamelin, you will pleased to know that I, the Lord Mayor, have given orders that a large hole in the ground will be dug on the outskirts of Hamelin and into that hole will be swept all of the rubbish in the streets and all of the rats that can be found and killed. Soon Hamelin will be clean and clear of rats.”

Soon the large hole in the ground was full of stinking rubbish and the bodies of dead rats and hurriedly covered over with dirt. But it was not enough: there were too many rats in too many hiding places all over the town and too much food for them in the silos and bakeries and shops and houses and they grew and bred and bred and grew just as fast as before. And now with the rats came a plague of fleas. And with the fleas came a strange sickness. Some children and old people had already died. A plague was on Hamelin!

When the Lord Mayor did come out on his balcony, he was surrounded by his Councillors and he announced rather nervously that the council had, in view of the rather desperate situation, agreed to offer a magnificent reward of one thousand gold guilders to any person who could rid the town of the rats.

The very next day a stranger appeared in Hamelin. He was different from everyone else. His clothes were colourful and seemed to come from many different places. He wore a hat covered with feathers and shells and bones. From a long scarf hung a silver pipe.

He walked quietly to the Town Square and knocked on the big brass doors of the Town Hall. He told the Mayor and his councillors that, for a thousand gold guilders, he could rid Hamelin of the rats that infested it. The Mayor enthusiastically agreed and the Pied Piper stepped outside.

He stood in the Square and looked quietly around. He took a deep breath and blew a note on his silver pipe that spoke to the rats of far off places, of woods and forests and rocks and mountains. He blew another note that spoke to the rats of foxes and wolves with sharp teeth and hawks and eagles with cruel talons. He blew a third note and all of the rats in Hamelin started to scurry towards the Pied Piper. They scurried out of doors, out of the windows, out of drains and out of holes. They scurried down the lanes and streets towards the square. Now the Pied Piper started to play a dancing tune and he danced out of the square and the rats followed along behind. They moved out of the town and towards the port. At the river side the Piper stopped and he placed just one toe in the water and, as he continued playing, the rats continued dancing across the wharves and into the river. Rats by their thousands danced out of the town, across the wharves and splashed into the river where they were drowned. When the last one had disappeared beneath the waters of the Weser, the Pied Piper stopped.

He stood quietly looking at the water for a while and then turned and walked back to the Town Square. The good people of Hamelin were celebrating the victory against the rats. At last they were free of the pestilence. The Lord Mayor and all of his Councillors were up on their balcony slapping each other on the back and making speeches. The Pied Piper waited for a quiet space and asked for his one thousand gold guilders.

The Mayor called out so everyone could hear, “A thousand gold guilders? How could you have possibly earned a thousand gold guilders? Why, everyone saw how, while the rats were drowning themselves in the river, all you did was dance about and play on that silly little pipe of yours. Here, be satisfied with forty guilders and think yourself lucky at that.”

To the shame of the people of Hamelin they agreed with their Mayor and laughed at the Pied Piper as he walked quietly out of the town.

The next day was a religious feast and all of the adults were in the church as he walked back into the town. He stood quietly for a while in the Town Square and then took a breath and played a note that spoke to the children of faraway places, clean air and sparking rivers. He blew another note that spoke to the children of fun and games and whales and dolphins and bright coloured parrots. He blew a third note and all of the children started to run and jump and skip out of the houses towards the Town Square. As they ran and jumped and skipped towards him the Pied Piper started to dance out of the square towards the port.

The adults in the church heard all of the children go past and they rushed out of the church to see what was happening. They called out to the children to stop and to come back but it was like they could no longer hear their parents’ voices. The parents were relieved when they saw the Pied Piper turn away from the river and dance with the children towards the mountain. Their relief turned to horror, though, when a small door appeared in the side of the mountain and first the Pied Piper and then the children started to run and jump and skip inside.

The parents ran up to stop them but it was too late. All of the children, bar one boy who was hopping along on crutches and couldn’t keep up, disappeared inside the mountain and the small door slammed shut so tightly that no one could tell exactly where it had been.

The people raced up with shovels and picks and started furiously digging holes in the mountain side but it was all to no avail.

The small boy on crutches tried to tell them of the sounds of faraway places, clean air and sparking rivers and fun and games and whales and dolphins and bright coloured parrots but no one seemed able to hear.

(An adaption of the traditional story created through being asked to tell it in local schools.)

This story is available for downloading for the purpose of reading and telling to others.
If you do so, please tell people where you got the story and please make a donation to an environmental organisation.

If you would like to publish it or retell it as a means of earning an income please seek my permission.

(NOTE: no income is being earned from submitting the preceding adaptation to this newspaper.
Beryl Young.)