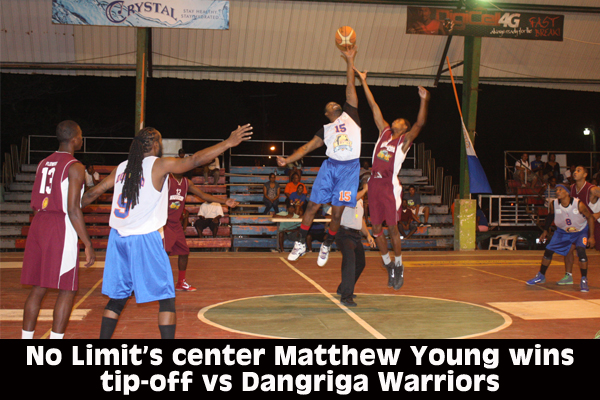 No Limit Soldiers destroy the Warriors, now look ahead to the playoffs

The first ever National Elite Basketball League’s (NEBL) regular season came to an end this past weekend. The league was well received in most markets, as fans were able to identify with their local franchises. But after the regular season comes the playoffs, and with only 4 of the 8 NEBL teams advancing to the post season, there was a battle for the final 2 spots between the Belmopan Point Bandits, the Dangriga Warriors, and the Belize City No Limit Soldiers.

In this final weekend of regular season play, the Belmopan Point Bandits needed to beat the Western Ballaz in San Ignacio on Thursday, and then needed the Warriors to lose to the Soldiers in Belize City. There were many who had already written off the Point Bandits, saying that there was no way they could go into the loudest building in the league and get a victory; but they did exactly that, defeating the Western Ballaz by a final score of 81 to 78, to keep their playoff hopes alive. Now all they needed was for the Dangriga Warriors, who had just beaten the league leading San Pedro Tigersharks a week earlier, to fall to the Soldiers from Belize City.

The Belize City No Limit Soldiers basketball club has been through a lot over the course of this inaugural NEBL season. It was a roller coaster ride of emotions for any die-hard No Limit Soldier fan who followed the team closely. First off, the Soldiers were the last franchise to join the league, which meant they had the least amount of time to assemble their squad and begin training. Then, a week before the start of the season, their player/coach, Darwin Leslie left the team for greener pastures. Darwin didn’t leave alone, though; he also took with him his sharp-shooter brother, Jacob Leslie. These two players were promptly replaced with center Elsworth Itza and guard Jamir Enriquez.

At the start of the season, the Soldiers had little to no team chemistry, and struggled out of the gate. But, after starting the season 2-2, they then went on a 4-game winning streak, before losing to the Tigersharks in San Pedro. The Smart No Limit Soldiers bounced back with a win against the Diplomats, but then lost 2 straight, before getting a win by default.

The team had to deal with a lot of internal conflicts, which were usually between players, but at times between some players and the coaching staff. Disgruntled players would often be absent for practice sessions, and sometimes even for actual games. And after the home loss to the Western Ballaz, the coaching staff decided to reach out to renowned basketball mind and coach, Matthew Smiling, to join the No Limit organization, to assist with some of the volatile personalities on the squad. But after their first game with Smiling, which resulted in a loss to the Point Bandits, it was beginning to look like the team was collapsing; flooded with talent, but unable to coexist.

Well, something happened in the days following the loss to Belmopan, and leading up to the game against the desperate Dangriga Warriors. The Belize City No Limit Soldiers seemed to be more together and united than they ever were at any other point throughout the season. Before the game last Friday night at Bird’s Isle, the Soldiers were laughing and joking with each other like brothers of the same family. The “one for all and all for one” attitude continued through the duration of the game against Warriors, as displays of camaraderie were visible and apparent on the No Limit bench. This friendship and solidarity is integral for any team’s success, as a house divided amongst itself cannot stand.

The No Limit Soldiers dominated the Warriors for the entire 40 minutes of play, defeating them by a final score of 94 to 64. Top performers for the Belize City No Limit Soldiers were: Andrew “The Rim Rocka” Ortiz with 23 points; Greg “Chip Dawg” Rudon with 17 points; Brian “Brybo” White with 13; Jamir Enriquez with 11 points; and Matthew “Jigga” Young, who only scored 4 points, but could be seen diving left and right for loose balls many times, as he pulled down a game high 14 rebounds.

The playoffs get under way this weekend, as the Soldiers will head to San Ignacio this Friday to face the Western Ballaz in game 1 of their best-of-3 series. Then on Saturday, the Tigersharks and the Point Bandits will start their series in San Pedro.