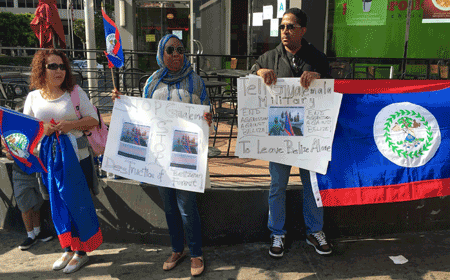 The group carried banners and posters that read, “Stop Guatemalan Aggression Against Belize”, “Stop the Annexation of Belize’s Sarstoon”, “Tell The Guatemalan Military To Leave Belize Alone”, “Guatemala Stop Being A Bully”, “Belizean Lives Matter: Justice for Danny Conorquie & Staff Sergeant Lambey”, and “Belize Is For Belizeans”. They also shouted slogans like, “Belize is For Belizeans”, “We No Want No Guatemala”, and “Guatemala Get Out of Belize”.

The organized protest demonstration that was called a week ago by the Los Angeles grassroots organization, BREDAA (Belize Rural Economic Development of Agriculture through Alliance), attracted well wishers along the way who cheered for the Belizeans as they verbally expressed their resistance to the present Guatemalan military occupation of the Belize Sarstoon River and Island. Belizeans are tired and disgusted with the long lasting Guatemalan claim that has harassed and intimidated the Belizean people for years, and has seen a strange upsurge of Guatemalan government aggression against Belizean territory in the southern district of Toledo with the annexation of the Sarstoon, as well as the western district of Cayo with the destruction of the Chiquibul Forest by Guatemalan peasants.

As the trickle of Los Angeles morning goers streamed by the Belizean protest on Wilshire Blvd., many inquired about the cause for the protest, and showed solidarity with the people of Belize for their right to self-determination and territorial integrity. Along the way other protests for Chicano rights, and immigrant rights, passed through the Belizean demonstration which even had a band from Oxaca, Mexico, who inquired about the protest and later played music in the background to the cheering Belizean protesters.

There was not one intimidation or aggression against the Belizean protesters. A Los Angeles Police Department (LAPD) officer showed respect for the Belizean protesters as he escorted a Korean protest through the street of Wilshire that has become a mecca and symbol of resistance in the Los Angeles County for protests and demonstrations of all kinds. The Los Angeles Belizeans were poised at the right place and at the right time on that beautiful Saturday morning as Belizean vehicular traffic passed by and honked their horns in solidarity with Belize and the Belizean people in their struggle for peace and justice against Guatemalan government injustices against Belize and the people of Belize.

Most obvious as the crowd of Belizean protesters swelled was the presence of Belizean women, who outnumbered the Belizean men in today’s protest. Many women brought their children to support the protest, and those who could not be there sent their sons and daughters to stand with Belize and Belizeans. It was an impressive and passionate group of Belizeans who in high spirits asked that another protest be organized again soon, and that many different functions in solidarity with Belize and the people of Belize be coincided with this naked Guatemalan aggression against Belize, until the Guatemalan government ceases and desists from aggravating and invading Belizean territory on the Sarstoon in the South of Belize, and the destruction and exploitation of the Belize Chiquibul Forest in the west of Belize.

The Los Angeles Belizeans’ protest demonstration organized by BREDAA today against the Guatemalan military oligarchy and its aggression, annexation, and invasion of the Belize Sarstoon River and Island, and the Chiquibul Forest, has been an historic one. In the entire history of the Belizean diaspora in the United States, there has never been a protest by Belizeans against Guatemala’s naked aggression and invasion of Belize in the entire history of the Anglo-Guatemalan dispute. The sleeping giant has awakened.