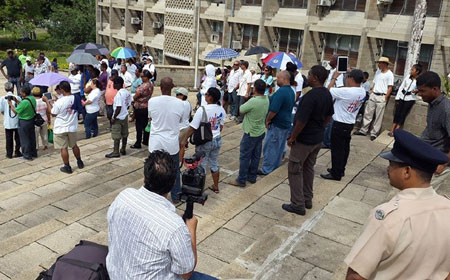 BELMOPAN, Cayo District, Wed. July 27, 2016–“I want my country back,” chanted scores of Belizeans, joined by Pastor Louis Wade as they marched through Belmopan and converged on Independence Hill during the Government’s regular Tuesday Cabinet meeting.

The protest, which took place hours after a candlelight vigil organized in memory of the beheaded Pastor Llewellyn Lucas, began at around 9 a.m. and concluded peacefully at around midday.

Protesters marched in front of several governmental buildings, including those of the Ministry of Foreign Affairs and the Ministry of National Security and the Curl Thompson building as Belizeans took to the podium to voice their discontent with the status quo.

According to Pastor Wade, the vigil held on Monday night was organized to allow Belizeans an opportunity to sympathize with the family of Pastor Lue, as he was popularly known.

Furthermore, he said that the aim of the vigil was also to allow Belizeans the opportunity to join their voices in the demand for an international and independent investigation into Pastor Lue’s death — an investigation into how William Mason was able to acquire Belizean documents, and also for our country to be firmly guided by the rule of law.

The protest on Tuesday morning, Wade said, was for those Belizeans who had felt strongly about the “I want my country back” campaign, which he had launched on social media, Facebook.

Though protesters have returned home and there is a deafening silence on Independence Hill, a second round of the “I want my country back” campaign has been scheduled for August 10 during a House of Representatives meeting.