Man executed in front of wife and kids 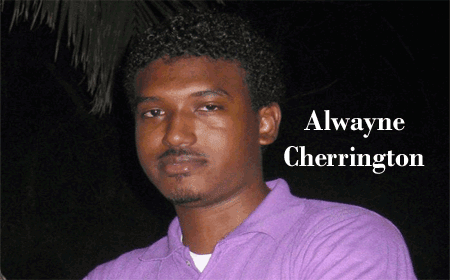 BELIZE CITY, Thurs. Mar. 31, 2016–The family of Alwayne Cherrington, 24, of La Croix Boulevard, who was an eye technician at the Belize Council for the Visually Impaired (BCVI), were devastated as their worst nightmare was made real when a gunman went to Cherrington’s mother-in-law’s house, kicked open the door and shot Cherrington dead at about 7:00 Holy Saturday evening while his two stepchildren and his wife were watching television near him.

Cherrington was sitting in a chair, talking with them and eating potato pudding.

His mother-in-law told Amandala that Cherrington and her daughter and their two children went to her house at about 6:30 Holy Saturday evening and they were socializing. She said that she had not locked the door, since it was early and it was Easter, and everything was going well.

She said that shortly after, a man ran up the stairs of the house and kicked open the door. He then fired multiple times from the doorway, straight at Alwayne, who was still sitting in the chair. The killer then ran from the house.

People in the area say that they saw a man run from the house and jump onto a motorcycle that was parked on the street in front of the house. He sped away, leaving behind a bicycle on which he had come.

Cherrington’s mother-in-law said that the incident happened so quickly. She said that before she could call police, they were already there; they must have been on patrol in the area.

Shantel Cherrington, the deceased’s wife, who was sitting beside him, said that she saw her husband drenched in blood and bleeding from his mouth. She didn’t know where he had been shot, so she quickly held him.

Police took Cherrington to the Karl Heusner Memorial Hospital, where he died shortly after arrival. His body has since been deposited at the morgue, where it will undergo the mandatory post-mortem exam to certify the cause of his death.

Cherrington’s mother-in-law said that the children are now traumatized, because their stepfather was murdered in front of them, and they do not want to come back to her house.

She said that Cherrington attended church regularly, and his family and the entire community are still trying to understand why he was murdered in that way.

Carla Ayers Musa, the director of BCVI, said that Alwayne impressed everyone with his charming personality. He was soft-spoken and quiet, but also bright and intelligent.

Cherrington is survived by his wife, Shantel; his two stepchildren; 3 brothers and 2 sisters, his parents and many friends, including the wider society whom he impacted by his kindness and consideration to people who attended the BCVI.

So far, five days later, police do not have anyone in custody for Cherrington’s murder, and the motive remains unknown.