The “man in the middle” – a necessary part of the game

BELIZE CITY, Thurs. Aug. 24, 2017–The same as in baseball/softball/hockey, etc. where passionate fans sometimes go over the limits in their outrageous remarks against the well-being of game officials (e.g. “k___ the umpire!!”) when calls go against their team, in football you can sometimes hear some pretty distasteful pronouncements coming from normally decent folks, as they take the opportunity to vent their week-long daily-life frustrations, using the referee or linesman as their lightning-rod target for emotional release. Sometimes the criticisms are merited; after all, the referee is a part of the game, just like the players, who similarly receive their fair share of insults and condemnation from disgruntled fans. It’s all a part of the game; but when the long whistle blows, it is expected that we all return to sanity and civility in our behavior towards each other.

In the heat of the game, players who are even otherwise friends in daily living, will sometimes go hard at each other in tackles that sometimes could even lead to injury. The game has rules, and a tackle can be hard and still fair; but sometimes, players go too far, and the referee’s job is to discern the difference between hard tackles and dangerous play, especially those with an apparent intent to harm the opponent. 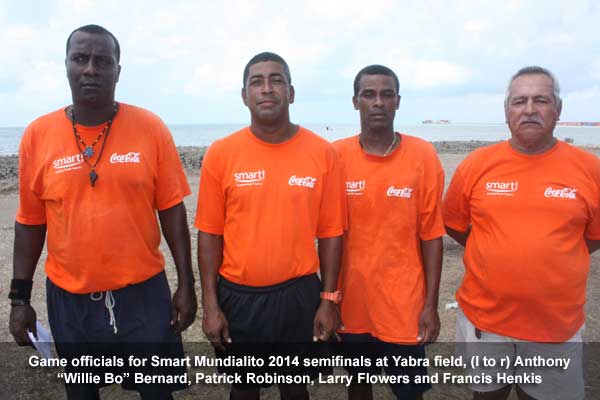 There is one vital rule, however, that allows this cauldron of human creativity, energy and emotion, packaged inside the combative art form called football, to consistently arrive at its wholesome conclusion; and that is acceptance by both sides in the contest that, as the Laws of the Game explicitly state – “The referee is the sole arbiter of the game.” He is the boss.

The individual holding the whistle is human, and can make mistakes; but his role as referee is sacred and must be respected if organized (association) football will be played. And so, whenever a player crosses that line, trying to overrule or disrespect the authority of the referee on the field, even if he is a multi-million dollar player like Ronaldo or Neymar or Messi, he will be dealt with harshly by the referee, usually a red card.

Unfortunately, especially following a painful loss, some players carry their animosity toward a referee even after the game is finished, not allowing the official to return to the comfort of civilian life, but subjecting him to harsh personal criticism or even threats. For that reason, it is a normal practice for game officials to be escorted off the field of play by a Police officer, and retreat immediately after a match to the safety of their private changing room, allowing time for emotions to simmer down among fans and players.

Where the game is concerned, when a player enters the field of play, the enclosed playing area at the MCC, for example, the authority of the referee is supreme, even before the game has started, and after the game has finished. The long whistle may be blown, but, perhaps unbeknownst to some players, the referee can still issue a red card to an offending player, as reportedly happened on Sunday.

Unless incarcerated, and even there the inmates enjoy certain sporting privileges, every citizen has a right to play football and recreate; but the right to participate in association football, that is, organized football that is sanctioned by the governing body of football in Belize, the Football Federation of Belize, can be taken away, temporarily or indefinitely, by the Disciplinary Committee of the FFB, depending on the extent and nature of the violation by a player.

Neo Nazis are Neo Nazis, and the Klan is the Klan; there is no debating the unrighteousness of their stance by freedom loving citizens; and likewise there is no football loving player or fan, including the now regretful violator, who would condone any physical assault upon a referee, and especially one where bodily harm is involved. It is true that in some cases referees deserve criticism and need to be sanctioned for their incompetence or misuse of their authority; but there are avenues to deal with that, as for players’ infractions. The incontestable fact is, any physical attack upon a referee, is an attack against football, the game we all love. And the message must be sent, loud and clear, to all football players, and fans as well.

Our best wishes for a successful operation and full recovery to referee Patrick Robinson (we erroneously said “Anthony” in our Tuesday issue, and we apologize); and our empathy as well to the now sincerely remorseful Mike (the team roster said Morlyn) Diaz, who, for the sake of the future of the game, must endure the punishment determined by the courts as well as the penalty prescribed by the FFB Disciplinary Committee for his most regrettable action.

Football will continue. And we pray that this tragic episode will mark a turning point for the better among players and fans, in regard to our respect for referees, for each other, and for “the beautiful game.”