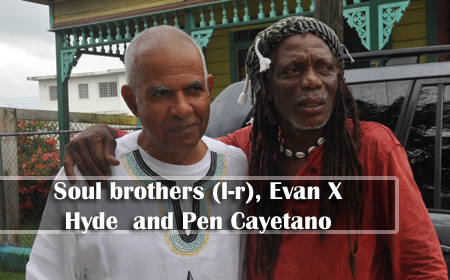 “Fellowship asserts the spirit’s freedom, the seal of its divinity.”

BELIZE CITY, Wed. Feb. 15, 2017–On Sunday, 5 February, 2017 at 3 p.m., artist Pen Cayetano honored writer Evan X Hyde and his work at his Studio Gallery at #3 Aranda Crescent in Dangriga, Stann Creek, Belize with a ceremony of deep meaning, knowledge and love. (Please see an article about the event by poet and journalist Rowland Parks at the following link at Amandala online: http://amandala.com. bz/news/black-history-month- artist-pen-cayetano-honors- kremandalas-evan-hyde/).

Evan X Hyde, born 30th April 1947, is a writer whose consciousness has travelled the development of the nation of Belize, the history of the world and whose brilliant erudition has illuminated the Belizean consciousness to the truths of its history in the local and global contexts, its African and Mayan roots, the machinations of power and the creation of freedom through words and actions. In poetry, plays, and over forty years of essays in Amandala Editorials and his “From The Publisher” column, Mr. Evan X Hyde speaks truth to power.

From his early exposure to knowledge of his African origins by his mother to his great great grandmother, Elizabeth “Betsy” Kingston, described to him as a “coal black woman from Africa” to reading the Autobiography of Malcolm X in university in the United States at Dartmouth, which transformed his consciousness, and his return to his native Belize where he founded the United Black Association for Development (UBAD) and later Amandala newspaper and KREM Radio and KREM Television to open the space in the national psyche to knowledge of its African and Indigenous Mayan origins and write the history of Belize’s lived reality from the roots with a fearless pen and a mind that experiences the music of words, to the formation of the UBAD Educational Foundation (UEF) and its Library of African and Indian Studies which works to share knowledge of African and Mayan history with the community. Mr. Hyde is a force of the Spirit of Belize, a warrior of fire in pursuit of freedom, unity and love, a native son of the soil whose life and work has liberated the consciousness of many Belizeans searching for meaning in life and freedom to create life and happiness.

That artist Pen Cayetano, a musician and painter of extraordinary range and gifts, who as a child was inspired by Mr. Hyde listening to his message “black is beautiful and human” which made him see himself for the first time as black and beautiful and worthy, chose to honor Mr. Hyde in this beautiful way, is an act of cultural unity of deep meaning and harmony. This is what builds the nation. This is the meaning of culture. The coming together of forces that build community, that liberate the mind and open the space for the creation of new ways of being. The culture that unifies, that inspires the human mind to build new things, dream new dreams and come to the fullness of the Godhead, the “isness” of the divine within. God bless Pen Cayetano. God bless Evan X Hyde. Divine spirits of God.