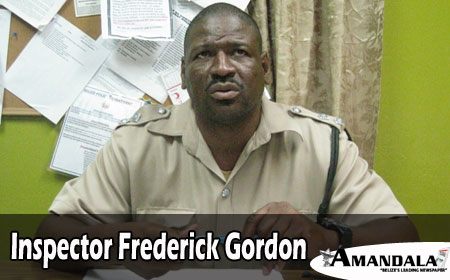 LADYVILLE—The Belize Police Department’s Belize District Rural Formation, which comprises the general area of Ladyville, Hattieville, and the entire area from La Democracia to Maskall, is now being managed by a senior police officer who was formerly attached to the Orange Walk Police Formation.

Today, Amandala met the Belize Police Department’s newly assigned Rural Executive Officer, Inspector Frederick Gordon, a humble 33-year veteran of the department, and he explained what his constituents can expect from him, while assuring us that he will do his best to continue the work of his predecessor.

He said, “I intend to carry on from where Mr. Noble left, he was doing a fantastic job in this area, I intend to push for more policing strategies for the area, and I intend to add more to this area, so residents can look forward to hearing more from me as the Rural Executive Officer.”

Gordon told us that he is currently working on all the open cases that he has assumed, including the situation involving two missing persons, Kevin Carcamo and Dwayne Young, for which he is asking anyone with information regarding the whereabouts of these persons to pass it on to the police so that they could take the necessary actions.

He outlined that investigations are ongoing in both cases, and that he has requested assistance from both the Belmopan and Belize City branches to assist in the location of Carcamo, who has been missing for 17 days.

The new Rural Executive Officer also pledged to boost checkpoints and establish more highway patrols on the two main highways within his jurisdiction in order to reduce the prevalence of road traffic accidents, which have claimed a significant amount of lives in that area since the start of the year.

For his part, Gordon, who is now in charge of 9 substations in the country’s most populous district, indicated that his main objective is to make sure that the residents of the rural areas of the Belize District live in a safe and secure environment, while enjoying a cordial relationship with the police.

Former Rural Executive Officer, ASP Christopher Noble, who was regarded as one of the most media-friendly formation commanders, was transferred from the post since August 4 after being in command for 19 months.