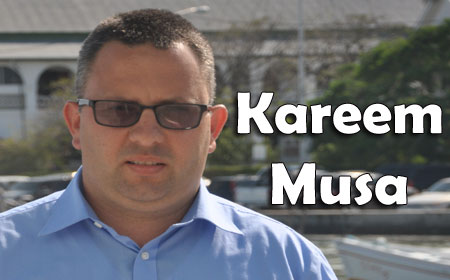 BELIZE CITY, Thurs. Feb. 12, 2015–Belize’s latest game show, Mek Mi Rich, which was launched last September, is now the subject of litigation in the first intellectual property rights claim that will be heard in the Supreme Court of Justice Courtenay Abel.

On Monday, attorneys for MMR (Mek Mi Rich) Belize Limited, Belize Telemedia Limited (BTL) and Dale Curtis Swasey, the man who brought the claim against BTL and Mek Mi Rich (MMR), had a case management conference in the chambers of Justice Abel.

Swasey, who is being represented in his claim by attorney Kareem Musa, filed court papers last December alleging that BTL violated a non-disclosure information agreement the company had with him, when he gave them the idea for the lottery, which was later put into operation by MMR.

The BTL game show, launched last September, is the subject of litigation

Today, Thursday, Musa told Amandala that MMR Belize Limited, which is being represented by attorney Naima Barrow, is the second defendant in the claim, and “they had applied to strike out the case on the ground that it disclosed no reasonable cause of action against them.”

Musa added, “There was a back and forth exchange between myself, Ms. Barrow and the judge, because this is a highly technical lawsuit. And as far as I am aware, it is the first of its kind in Belize.”

The claim involves the intellectual property rights of Swasey, a resident of Corozal Town, who is a computer programmer.

“In January 2012, Mr. Swasey approached BTL with this novel concept, whereby using the company’s database and their operating system, as operated by DigiCell, the cell phone department of BTL, he came up with lottery texting,” Musa explained, “it’s a unique concept whereby you would use your phone credit to purchase a lottery ticket. You get to pick your numbers and then you text your numbers to the BTL system.”

Musa said Swasey signed on to an information exchange agreement that specifically stated that no information could be disclosed to any third party.

“BTL and its officers were well aware that what Mr. Swasey was disclosing to them was extremely confidential. It’s not as if they did not know. Why else would they have him sign onto an agreement of that nature?” explained Musa.

The information Swasey was disclosing to BTL was uniquely his, that is why it is his intellectual property, Musa said.

“After two years, Mr. Swasey received a correspondence from BTL stating that they could not go ahead with his proposal, because it did not fall in line with their strategy for the fiscal year 2014-15. That was the end of it; after two years of hard work, nobody would use it, because he is protected under the non-disclosure agreement for two years from the date of termination,” Musa said, “so up to the year 2016, no one is to utilize that information that he provided to BTL.”

Musa said Swasey was shocked that shortly after BTL said it was not going to use the idea, commercials began to appear for a new game show called “Mek Mi Rich.”

“It was not revealed that Mek Mi Rich was going to be utilizing lottery texting similar to the concept of Mr. Swasey and all the information he divulged to them. It was not until after the first game show that the producer explained that you were going to be purchasing your lottery credit by text and using your text credit, which is the identical concept that Mr. Swasey disclosed to BTL,” Musa explained.

Asked what remedy Swasey is seeking from the claim, Musa said that Swasey is seeking damages for the loss of his intellectual property and damages for the breech of the information exchange agreement, because the information agreement contains very strict language that if the recipient discloses this information to a third party, the damages are so grave that it would cause irreparable harm. “Money damages might not even be enough for the harm caused as a result of disclosing this information”, Musa said.

Musa said that an application was made by Barrow to strike out the claim against MMR, but the judge did not strike it out. Instead, the judge gave the claimant additional time to amend the claim.

Attorney Naima Barrow told Amandala this evening, Thursday, however, that “the judge struck out the claim and ordered the claimant to pay $1,000 and then they can amend the claim. If they don’t pay, they can’t come back with the claim.”

Amandala has been unsuccessful in contacting attorney Magali Perdomo, who is representing BTL in the case.