Two men charged in connection with theft of $11,155 worth of jewelry 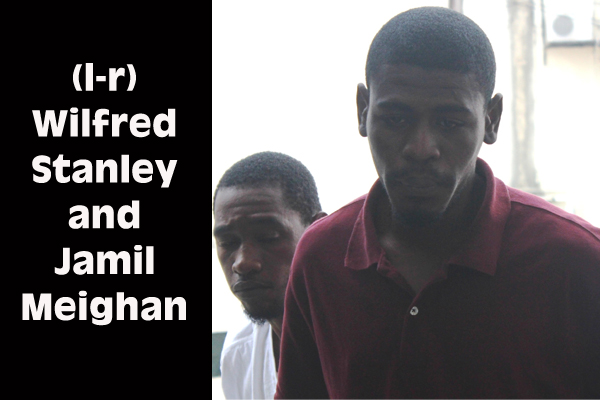 Two men, a construction worker and a Port of Belize stevedore, were both released on bail after they appeared before Magistrate Dale Cayetano, to be arraigned on charges of burglary and handling stolen goods, in connection with $11,155 worth of jewelry that were stolen from a home in the West Landivar area of Belize City.

Police charged Jamil Meighan, 25, a construction worker residing at 8250 Ivor Street, with one count of burglary, and Wilfred Javier Stanley, 30, a stevedore residing at 173B Neal Pen Road, with six counts of handling stolen goods.

Both men were arraigned separately, but there was no objection from the court’s prosecutor to offering them bail.

Cayetano offered them bail of $6,000 plus one surety in the same amount and adjourned their case to June 22.

Police are alleging that sometime between April 9 and 12, Jamil Meighan entered Janelle Reyes’s home as a trespasser and stole several pieces of jewelry, with a combined value of $11,155.

Based upon their investigation, police charged Stanley with the six counts of handling stolen goods.

Police are alleging that Stanley, on April 15, dishonestly assisted in the disposal of two gold chains valued at $400.

The fourth charge of handling stolen goods relates to Stanley’s actions on April 24, when he assisted in the disposal of a gold ring with diamonds valued at $3,000, and a pair of heart-shaped hoop gold earrings valued at $750.

All the items that police recovered from the three pawn shops were identified as the property of Janelle Reyes.

Out of the $11,155 worth of jewelry that was reportedly stolen from Reyes’ house, police recovered a total of $10,930 worth of the items.

According to police, in a statement that Meighan gave, he allegedly directed them to Stanley, his accomplice, who had the stolen items that Reyes reported were taken from her home between the hours of 8:30 p.m., on April 9, and 10:30 a.m., on April 12, when her home was burglarized.