Two men remanded to prison for possessing parts of a shotgun 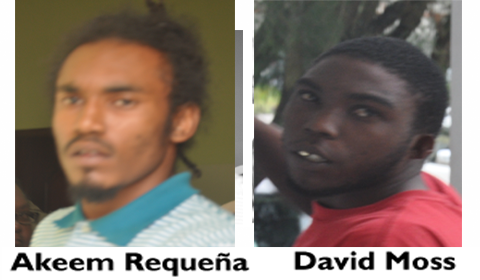 BELIZE CITY–Two Belize City men who said they wanted to be good Samaritans when they found parts of a shotgun and who were busted by the Gang Suppression Unit before they were able to hand in the parts to police, were remanded to prison this morning after they were arraigned on a charge of possession of a firearm without a gun license.

Akeem Requeña, 21, an electrician and resident of Marva’s Alley, was charged along with David Moss, 19, a student of Dolphin Street. Both men pleaded not guilty to the charge.

When he entered his not guilty plea, Requeña asked Senior Magistrate Sharon Frazer if he could say something.

“I had informed the police that while going through an alley, we found a ratchet and a gun handle. We told the police that we had just found it, and we were going to hand it in. But the police told us that we better tell that to the judge,” Requeña explained.

“While I hear you, Mr. Requeña, the law also makes provisions for components for a firearm,” Frazer replied, “The thing is that you have pleaded not guilty, so it is the police who have to come and prove that you had those things.”

Frazer continued: “But until then, I cannot even offer you bail until three months’ time.”

“They will have to come here and tell me their side of the story, but until then, the charge is still before the court. The Magistrate’s hands are tied when it comes to gun offences,” Frazer told the two.

“For this, I have to remand you. After three months have passed, only then I can consider bail for you,” said Frazer

Requeña, remaining composed, told the court, “I was only trying to be a Good Samaritan.”

“Components of a firearm are still an offense,” the Senior Magistrate said, “this is what is unfortunate. The best thing is to have left it there. They found you in possession of it; not even the courts can intervene.”

After Frazer announced that the two would be remanded, Mrs. Dianne Finnegan, who heads the Youth Apprentice Program, explained to the court that Requeña has been part of her program since 2010 and that he’s an electrician and has been exemplary.

“We are getting ready to launch this company next week,” Mrs. Finnegan told the court.

“This is one of the cases where discretion should have been exercised,” Frazer said.