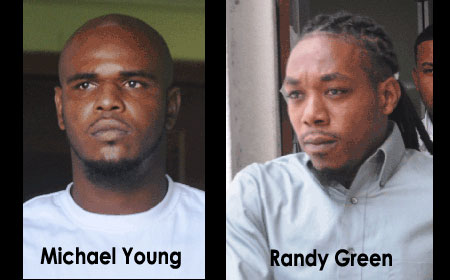 BELIZE CITY, Wed. Dec. 7, 2016–On September 21, 2011, gunfire rang out shortly after the Independence Day parade had passed the junction of Victoria and North Front Streets, and as a result of that shooting, Joshua Abraham, a nine-year-old standard 2 student of Holy Redeemer Primary School, died from a gunshot wound.

The murder sent shock waves throughout the city, marring the festive spirit of the 30th Independence anniversary. Police hastily arrested two suspects who were eventually indicted for the early afternoon murder – which was witnessed by several persons, three of whom gave police witness statements. The statements are what the Crown would rely on to secure a conviction.

That, however, is a purely theoretical construct of how the criminal justice system is designed to function in its role of protecting society from its law-breaking members.

After a marathon trial which began on October 30 and lasted until today, December 7 the two men accused of firing the fatal shot that ended Abraham’s life — Michael Young, 27, and Randy Green, 30 — walked out of the Supreme Court of Justice Adolph Lucas, freed of the murder indictment.

Justice Lucas sat on the case without a jury, and ruled to acquit Young and Green immediately after their attorneys had made no-case-to-answer submissions.

“There is no evidence that these two accused persons fired any gun,” Justice Lucas said. He added, “The Crown has not established a prima facie case against any of the accused persons.”

Attorney Christelle Wilson, who represented Green, asked Justice Lucas to stop the trial because the prosecution did not satisfy all of the elements of the offense of murder, and had not presented any evidence against her client.

Attorney Baja Shoman, who works out of the country’s meagerly staffed Legal Aid office, defended Young. Shoman also made a no-case submission, which echoed the same lack of evidence position that prompted Wilson to appeal to the court to stop the trial.

Immediately after it began, the trial slipped into a voir dire which lasted about a month, as the two defense attorneys and the prosecutor, represented by Crown Counsel Janelle Tillett, battled over the admissibility of caution statements that Green and Young had given to police.

Notwithstanding Tillett’s persistent attempts to convince the court that the statements given under caution were given in accordance within the acceptable realms of the Law of Evidence, when the voir dire was finally determined by Justice Lucas, the defense came out on top.

Wilson and Shoman’s success in convincing the court that the statements their clients gave to police were extracted under duress, and Justice Lucas’ ruling not to admit two caution statements, were the early signs that the prosecution’s case had entered a kind of life-support mode where it was now completely dependent upon the eyewitnesses who had given statements to police.

Tillett, undaunted by the first major blow to her case, soldiered on to secure a conviction. The two eyewitnesses who had given statements to police turned out to be absolutely unreliable when they entered the formal setting of the courtroom and were speaking from the witness box.

In this case, they recanted the statements they had given to police.

Out of the three witnesses who gave police statements, only two showed up to testify at the trial; the third witness, Nichole Garoy, went into hiding and was never located.

The two witnesses, who testified, Michael Andrews and Eric Martinez, were no help; they had to be declared hostile witnesses, dooming the effort of the state to secure a murder conviction.

With the acquittal of Green and Young, no one has been held responsible for the murder of 9-year-old Joshua Abraham on Independence Day, 2011.