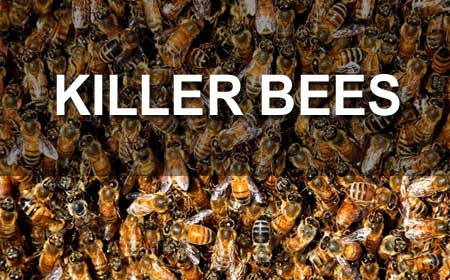 BELIZE CITY, Thurs. Aug. 24, 2017–Bernard Richards, Jason Saldivar, and two young mothers, who are sisters, and their three children were stung by killer bees in the Partridge Street Extension area near the Lord Ridge Cemetery around 4:30 this afternoon.

The police and the ambulance services were called to the scene to rescue the victims. The ambulance was unable to retrieve the children due to the swarming bees, but the heroic police officers got out of their mobile and went for them. They successfully brought the children to the ambulance, despite the bees that were attacking.

The two sisters and the children were taken to the Karl Heusner Memorial Hospital for treatment. Richards told Amandala that about 4:15 this afternoon, he brought some materials to put on his lot. He went to talk to one of his neighbors, leaving his friend, Saldivar, to put the materials on the lot.

He was at his neighbor’s home when he heard Saldivar shout, “bees! bees!”, and saw him running, with the bees swarming around him.

People in the neighborhood ran for safety, but not all of them escaped. Richards said he ran for safety too, but he turned back when he saw the bees attacking the two young women and their children in their house.

Richards said he believes that if he hadn’t gone to their assistance, the bees would have killed the children.

Saldivar said that the bees must have been nesting in the grass in the area and when he was throwing the materials into the lot, he agitated them. The men have since stopped their activities on the lot until after the bees are removed. They are hoping that the authorities come soon to get that job done.