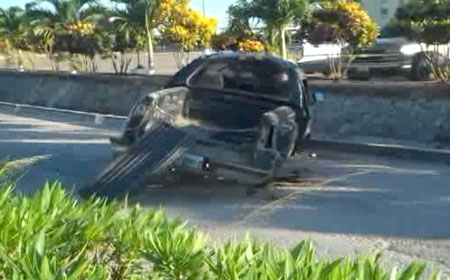 COROZAL–A Mexican national lost his life, while another was injured following a fatal traffic accident that occurred yesterday evening on the outskirts of the Corozal Free Zone in northern Belize.

At about 4:20 p.m. yesterday, September 29, police were called to the scene of an accident in the vicinity of the Corozal Free Zone where they saw a blue Ford Ranger pickup truck in an extensively damaged condition in the middle of the road.

Initial investigations suggest that at about 4:00 p.m., Perez exited the Corozal Free Zone in the vehicle at high speed, after which he consequently lost control of his pickup truck near the Las Vegas Hotel and Casino. The truck reportedly flipped several times before coming to rest on the concrete barrier which separates the two sides of the road.

Perez and his passenger, another Mexican national, Tulio Diaz Lopez, 50, were flung from the vehicle, and he (Perez) reportedly sustained a fatal blow to his head and died instantly.

Perez’s body was transported to the Corozal morgue where it awaits a postmortem. Lopez, on the other hand, received minor bruises to the body and a small cut wound to the right upper side of his eye, for which he was later treated at the Corozal Town Hospital before being released.

Corozal police, who stated that the matter is being investigated, said that a formal statement was later taken from Lopez, who was subsequently released from police custody and escorted to the Belize/Mexico border, and that so far, they have ascertained that Perez was indeed driving at a high speed and was apparently under the influence of alcohol at the time he lost control of the vehicle. They are, however, awaiting the results of the post-mortem and attempting to get a blood sample from the deceased to verify that he was highly intoxicated.

We understand that the family of Perez, who, we were told, was a former police officer in Chetumal, Quintana Roo, Mexico, is making arrangements to take his body back to Mexico.