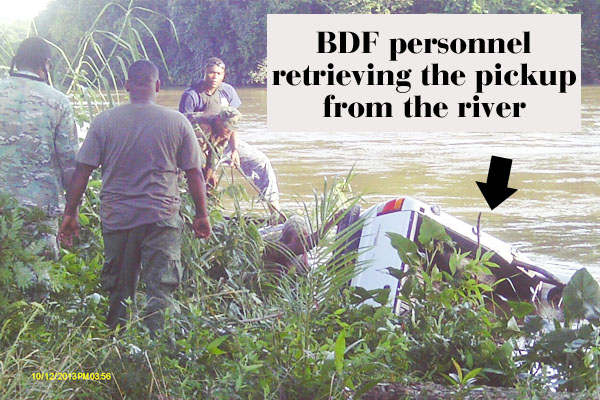 A joint military training exercise that was being conducted between a Belize Defence Force team and foreign military counterparts was disrupted at about 11:30 a.m. today after the gusts that were generated by their helicopter allegedly blew the pickup truck of a nearby work crew into the Haulover Creek.

This morning, a team of BDF soldiers and members of foreign armed forces was reportedly in a 100-foot long Chinook helicopter doing routine training on top of a 3-storey abandoned building situated in an area off the Airport Road near the Haulover Creek when the incident reportedly occurred.

Residents who live in the vicinity told us that the BDF had previously informed them that they would be conducting training exercises in the area, which they occasionally did, but this was the first time that the training was done using a helicopter.

One of the witnesses said that the helicopter stirred what he described as “hurricane force winds” as it landed on top of the building, which is when the strength of the air currents not only sent tree branches toppling on top of nearby vehicles and blew items from a neighbor’s yard into the nearby river, but it also pushed a pickup truck into the murky waters as well.

The occupants of the pickup, who were AC technicians, were across the river servicing the air conditioners at the Belize River Lodge.

Kimberlyn Alford, who resides in the area where the incident occurred, told Amandala that she was sleeping when she was awakened by the sound of the helicopter landing on the top of the building, which is just a few feet from her home. She said that she then saw some of the military personnel exiting the helicopter, but when she looked towards the river, she saw that a pickup truck was sinking in the river.

Alford said that she also noticed that her washing machine, chairs and other items that were in her yard were also being blown into the river, which is when she made an effort to secure some of the items.

At around 2:30 p.m., the BDF – assisted by a diver and members of the Belize Coast Guard – began the lengthy process of removing the vehicle from the river. The Ford Ranger pickup, which was parked near the bank of the river, was the property of KIKO’s Engineering Services, which is based in Orange Walk. Its proprietor, Enrique Navarette, who rushed to the scene thinking that his workmen had also gone into the river with the truck, told Amandala that he was all the way in Orange Walk when he got a call informing him of what had happened to the vehicle.

Navarette said that when he reached the scene, his employees showed him where the vehicle had gone down and the BDF personnel told him that they were going to extract the pickup from the river. He mentioned that he was concerned because of the length of time that the vehicle had been submerged in the water, and also because the pickup suffered additional damage while being taken out of the water.

He said that he used the vehicle on a daily basis to transport his workers to their different worksites, and wanted to know if the BDF would compensate him, or at least lend him a vehicle until his vehicle was replaced, since he needs the vehicle for his work throughout the country.

BDF Chief-of-Staff, Col. Raymond Shepherd, subsequently told KREM News that they do not accept liability for what happened. He confirmed that there were some soldiers training in the area, on top of a building, when the pickup went into the river. He mentioned that several vehicles were parked in the same area, but only that specific vehicle ended up in the river.

Shepherd said that he is not able to state whether it was the force of the winds created by the helicopter that caused the incident.

The pickup – which is valued at approximately $15,000 – was retrieved from the river about 2 hours later, but will more than likely need serious repairs before it becomes functional.