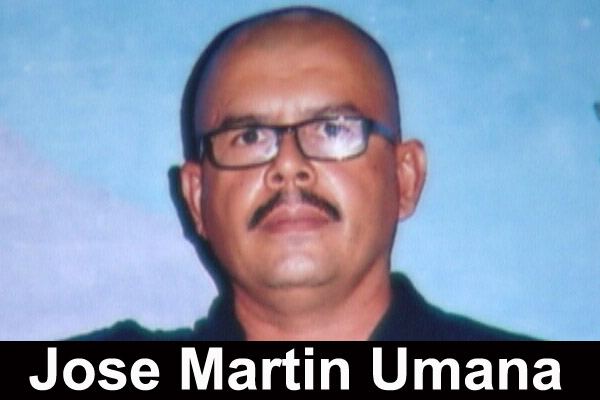 Vultures were feeding on the body

A taxi driver of Belmopan, Jose Martin Umana, 45, who was missing since Saturday, July 13, was found by his brother-in-law, Marin Aleman, on the ground in a state of decomposition behind a cohune tree in an area between George Price Boulevard and the Western Highway at about 4:30 yesterday evening.

A postmortem exam was conducted onsite to certify the cause of his death, but the autopsy was inconclusive due to the advanced state of decomposition of the body. Umana was buried immediately after the autopsy.

Aleman told reporters that yesterday evening he was driving his car on the George Price Boulevard searching for Umana when some John Crows (vultures) attracted his attention.

He stopped, got out of the car and went to see what was attracting the birds, and behind a cohune tree, he found his brother-in-law lying on the ground face down. He was in shorts, and had no shoes.

Aleman said that on Saturday when he was told that Umana was missing, he began to search for him immediately. He was in Ontario searching for him when police found his taxi car, with its stereo missing, but Umana was nowhere to be found.

Aleman then went to the Spanish Lookout area and surrounding areas to search for him, but it was not until Wednesday that he went to the George Price Boulevard area to continue his search, and that was when he was attracted by vultures, which led him to find Umana, at a distance of about six miles from where his car had been found abandoned in Ontario.

Police suspect foul play, and a murder investigation has begun.

Lucia Aleman, Jose Umana’s common-law wife, told police that about 9:30 on Saturday morning her husband was eating at her stall at the Belmopan market when shortly after, a man of Indian descent came up and requested his taxi service.

She said that before the man left with her husband, he came to the stall and bought some fruits, then got into her husband’s taxi and they departed for an unknown destination.

Aleman said that about 15 minutes after they drove away, she called her husband, but the call went to his voicemail. She then began to call his phone frequently, but got no answer.

Around 8:00 that same Saturday evening, she became very alarmed that he had not contacted her, nor returned home. She began to sense that something had happened to him, and went to the police. She said that he was a person who is at home every evening by 8:00, and it was not like him not to communicate with her and stay out after 8:00 p.m.

She said that over the seven years they have been living together, he never reached home late, and when he left her stall on Saturday, he was not jittery or nervous, nor did he give any indication that his life was in danger.

Jose Martin Umana is survived by one daughter, and by his wife, Lucia Aleman.