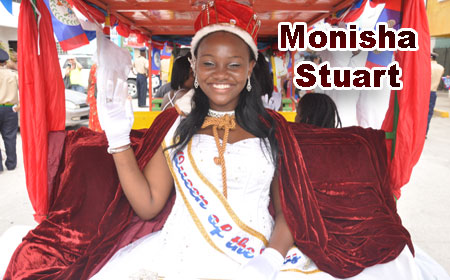 BELIZE CITY–On the occasion of official ceremonies held at the Memorial Park in Belize City to commemorate the 216th Anniversary of the Battle of St. George’s Caye, Her Graciousness Monisha Stuart received the scepter from outgoing Queen of the Bay Jahrine Courtenay Avila, with which she will reign for the next 12 months over the “hearts of the Bay.”

Jahrine also transferred her red and gold crown and red robe to Monisha, who was beaming with a jubilant, radiant smile as she received the emblems of royalty, officially marking the start of her reign as the 69th Queen of the Bay.

Stuart, who won the pageant held at the Bliss Center for the Performing Arts on Saturday, August 31, was serenaded by Sofia Muschamp as she made her way to the throne to witness the performance of the winning song for this year’s National Song Competition.