“My company should pay for Noh Mul’s destruction.” – Denny Grijalva 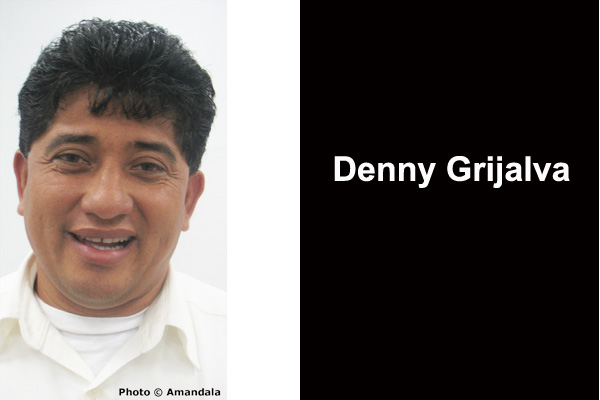 Denny Grijalva, owner and managing director of De’ Mar’s Stone Company and the man who unsuccessfully contested the last general elections for the United Democratic Party in Orange Walk Central in 2012, told Amandala this afternoon that his company should be fined for the destruction of the Noh Mul Archaeological Site last week, when it was reported that an excavator belonging to Grijalva’s company had hacked into the Maya ceremonial monument to obtain gravel for landfill.

“My company should be fined, because we did something wrong,” Grijalva, who was born in Guatemala but who has lived in Belize since his youth, told us.

However, he added that it is unfair for his company to get all the blame for the destruction of the monument, because, as he puts it, others had been digging for landfill from the site for years. He said that his foreman, Javier Nunez, had only been working in the area for a day and there is no way he could have caused the damage reported in that short space of time.

Some reports say that more than half of the Maya monument, once the tallest structure in that part of the country, had been hacked away.

On Tuesday, the Chief Executive Officer in the Ministry of Tourism and Culture, Tracy Taegar-Panton, told the media that the fine under law is a mere $10,000, which, she said, could never rectify the damage that has been done.

In a statement released on Wednesday, Grijalva said that, “The chairman of Douglas Village was reportedly not satisfied with the quality of the material [being used for road works in his village] and as such he obtained permission from a landowner to extract material from his property, from which material has been excavated for well over a decade.”

Grijalva told us that the excavations at the Noh Mul site had happened under the administration of both the ruling United Democratic Party and the Opposition People’s United Party.

According to Grijalva, he wrote the public statement on his return to Belize. He confirmed that he did leave Belize on Sunday, to a location he declined to disclose, but he denied allegations that he was hiding away in Guatemala because of the controversy over the destruction of Noh Mul, which has attracted major international attention.

“I am very, very sad,” Grijalva said, in expressing his feelings about what has transpired.

“This has nothing to do with my integrity and the way my heart is to serve this country,” he told us.

We asked Grijalva if he has provided an official report or statement to the Barrow administration, and he told us that he has not.

The UDP businessman said that, “While I will be launching an internal investigation, I am committed to fully cooperate with the authorities in their investigation into this regrettable incident.”

Grijalva said in his press release that, “De’ Mar’s excavation on the site began at around 8:00 a.m. on Thursday, May 9, and continued up to 5:00 p.m. that day. Operations resumed the following day when at around 10:30 a.m. persons identifying themselves as officials from the National Institute of History and Culture (NICH) reportedly appeared on the site accompanied by a crew from an Orange Walk Town based television news station. The officials instructed the company foreman to halt operations informing that the site is of archaeological interest.”

Grijalva said that the foreman, Nunez, contacted him seeking further orders and he instructed Nunez to immediately shut down all operations with the excavator and trucks. He added that the equipment was removed from the site at around 10:00 a.m. on Saturday, May 11.

Grijalva said that, “Recognizing that the buck stops at my desk, I share the public’s concern and indeed condemnation at the unfolding of this very unfortunate incident.”