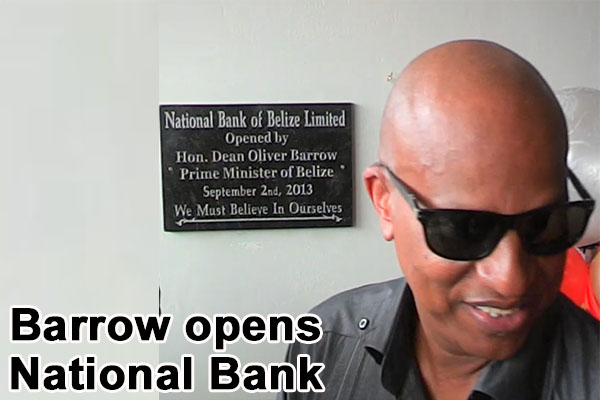 The National Bank of Belize—which plans to offer mortgage financing at a concessionary rate of 5.5% for a maximum of $100,000—was launched in Belmopan Monday morning, and according to Prime Minister and Minister of Finance Dean Barrow, who inaugurated the facility by announcing the new rate, the bank would be open for business as early as Monday afternoon.

“Our lending rates will be unbeatable, because our bottom line is people and not profit. That is why our introductory offer to the Belizean people is an unbelievably low 5.5%,” Barrow announced to the gathering.

He said that the competition the national bank would give the commercial banks redounds to the advantage of the Belizean public. Barrow said that it is no coincidence that as soon as Government made the announcement that it would open the new bank, the commercial banks—which have maintained what he characterizes as an “unacceptable” spread between borrowing and lending rates—moved immediately to lower their lending rates.

“That is why the plan is ultimately to take the national bank to the next level and turn it into a full-service, deposit-taking, credit-card offering institution as soon as we can,” Barrow added.

He said that the mortgage financing would be limited to first-time homeowners, and no funds would be provided to refinance mortgages clients now have with the commercial banks.

Barrow also addressed skepticism that the bank—which is being financed with an initial $20 million from the proceeds of the Venezuela-financed Petro Caribe Fund—would be used as another “hustle vehicle” for the well-connected or as a slush fund for electioneering.

“The utmost professionalism and the highest standards will be required to see this enterprise through. That means sound lending practices, based on proper evaluation and satisfactory collateral. The National Bank cannot be a grab tub or the political pork barrel which, for example, the previous administration turned the DFC [Development Finance Corporation] into. So the people for whom all this is to be done must do their part: When you borrow, you have to repay. And if we run into trouble with delinquency even at this first stage, we will never move to level two,” Barrow said.

The establishment of the new bank is “a signal departure” that will benefit the wider public—but in particular the teachers and the public officers, he also commented.

“I don’t believe they need any encouragement to take advantage of this thing. I suspect that the demand will be over the top,” Barrow told journalists after the inauguration.

“I have every confidence that especially our teachers and public officers know exactly how high the stakes are and will partner responsibly and effectively with Government to make the National Bank the pride of Belize and the envy of the Caribbean,” he also remarked, in his inaugural address.

Barrow had introduced a motion for $20 million in financing to Parliament, and he told the press today that another motion, to put some additional equity into the National Bank, will be presented before the year’s end.

Addressing concerns in the public domain that the National Bank could suffer from the pitfalls that some lending portfolios of the Development Finance Corporation of Belize and the Social Security of Belize have experienced, Barrow said that the board of directors, headed by Senator Joy Grant, is comprised of “all good men and women of truth,” including the president of the National Trade Union Congress of Belize (NTUCB).

“There would be a ready-made whistleblower, if ever anything would ever appear to be going awry,” said Barrow.

What would cause them to run into problems, he said, is if people feel they can borrow and not repay.

“I am confident that the message will get over and that people would recognize that if we are to go to level two, as I said, which we earnestly want to do – look, SSB, Telemedia, who so earnestly want to put their money into the commercial banks [but] the commercial banks don’t want your money – there would be a queue to put those monies in the National Bank of Belize. The sky would be the limit, but if we caulk it up because people borrow and don’t repay, then we lose a phenomenal opportunity, and I don’t think that’s going to happen,” said Barrow.

Barrow said that the National Bank will adhere to the standards of prudential management, and it will be subject to the prudential regulatory jurisdiction of the Central Bank of Belize.

The bank is located at the corner of Forest Drive and the Hummingbird Highway.