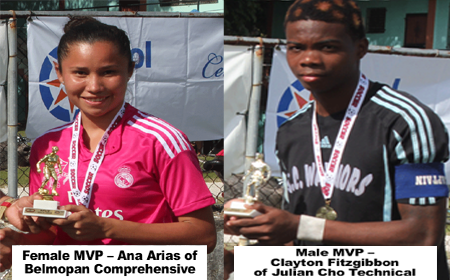 BELIZE CITY, Wed. Feb. 24, 2016–Four female (F) and four male (M) high school football zone champions from across the country converged at the MCC Grounds in Belize City last Friday and Saturday, February 19-20, for the National Secondary Schools Sports Association (NSSSA) football championship, which was hosted this year by St. John’s College. The tournament had a simple knockout format, with losers on Friday playing for third place on Saturday, and Friday’s winners meeting for the championship on Saturday.

Next was a male encounter, with Julian Cho Technical prevailing, 2-nil, over Sacred Heart College, on goals by Jarren Lambey and Justin Trapp.

In the last game on Friday, it was Anglican Cathedral College (ACC) boys gaining the 2-1 win over San Pedro High School. San Pedro took the lead on a goal by Omar Ogaldez, but ACC rebounded with goals from Akeem “Bib” Sutherland and Christian Ancona. 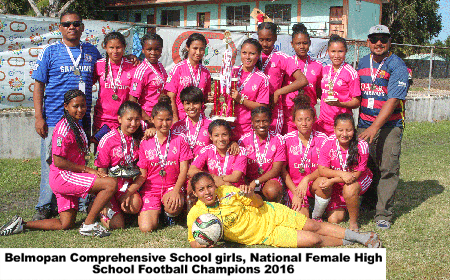 Saturday’s opener saw Independence High girls taking third place with their 1-0 win over SCA, on a penalty converted by Luz Acevedo late in second half.

The third place game for the boys followed, where San Pedro High won, 3-1, over Sacred Heart College. Sacred Heart took the lead on a penalty by Osvin Parham, but San Pedro High came back with goals from Luis Mencias (a penalty), Omar Ogaldez and Ashton Lopez.

The female championship game followed, and it was Belmopan Comprehensive School (BCS) with a decisive 3-0 win over Corozal Community College. Vivianne Pivarel, Jayda Brown and Ana Arias got a goal apiece for BCS.

In the male championship final, Julian Cho Technical High School (JCTHS) of Toledo won, 3-1, over Anglican Cathedral College (ACC) of Belize City. Jarren Lambey’s header gave Julian Cho the 1-nil lead, before Akeem Sutherland converted a penalty for ACC to knot things up at 1-1. Julian Cho got a penalty in second half, which was stopped by ACC goalie Alvin Mangandi; but Julian Cho got 2 more goals, 1 each from Clayton Fitzgibbon and Justin Trapp, to take the 3-1 victory and the championship. 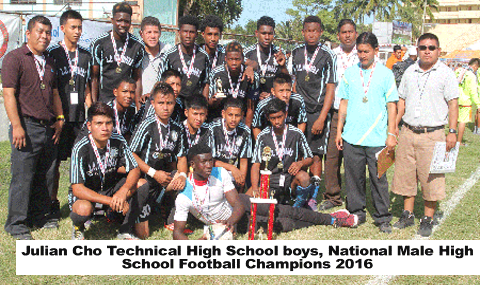 Individual awards issued after the games were as follows: