Home Highlights Nelson Mandela – when comes such another?
Highlights

Nelson Mandela – when comes such another? 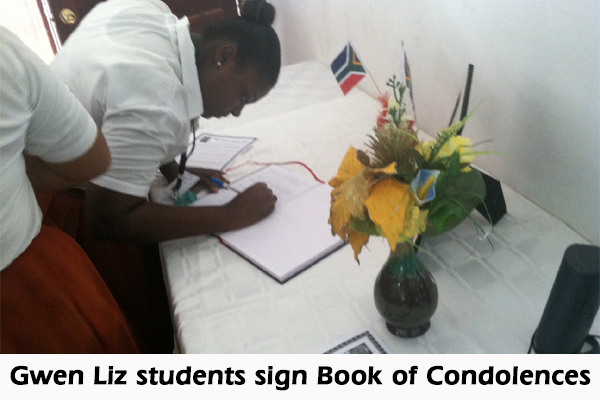 Students pen thoughts in Book of Condolences at Kremandala

The signing of a Book of Condolences dedicated to the late Nelson Mandela, aka Madiba, who passed away last Thursday, December 5, continued today at the Library of African and Indian Studies, on the Kremandala compound, at 3304 Partridge Street in Belize City.

The signing is a joint effort of Kremandala and the UBAD Education Foundation (UEF).

Among the first to pen their thoughts were students of Gwen Lizarraga High School and St. Martin De Porres School. They came at the opening session held at 1:00 p.m. on Tuesday, which was incidentally being celebrated as Human Rights Day 2013.

It was also the day when tens of thousands in South Africa—including heads of state from many countries across the world—participated in a Memorial Service as part of the 10 days of mourning, which concludes this Sunday, December 15, with Mandela’s state funeral.

Denise Neal, her teacher, said that she wanted her students to be aware of who this great African leader was. She gave them a briefing and brought them over to the signing, not just to express their condolences but also for a unique learning experience.

“I am confident that with this experience, they have taken something from it. They learned that not because they are Black they are left out there on their own. There are people who are still out there carrying on the journey in the fight for human rights, and they have something to be proud of. We will miss Nelson Mandela, and I am hopeful that there are still great leaders there in Africa that will continue the struggle,” Neal told KREM TV.

A group of Standard 6 students of Belize Elementary School came today, Thursday, despite the rain, to log their sentiments in the Book of Condolences.

Zazie McKenzie of Belize Elementary School described Mandela as a man of humility, grace and integrity. “Our world is a better place because of your sacrifice,” Mckenzie, 12, said.

“Your legacy will live on forever, making us better people and better leaders,” said Alissandra Neck, 12.

“Nelson Mandela was loved and admired by people all over the world. He is considered a hero to South Africa as he fought to end apartheid in that country. I offer my deepest condolences to the entire Mandela family on the passing of a patriot who took a long journey and dedicated his life to the freedom of others. His fight for freedom has provided hope to many others all over the world. May his soul rest in eternal peace and his memory live forever,” said Kristin Musa, 12.

“He left here a better place. May he rest in peace and may his teachings continue to impact us,” said Amber Marin.

“May the world also live by his example for years to come,” Kitlynne Haylock, 13, said.

Audley Mulati of the Library of African and Indian Studies told LOVE TV that Mandela was an exceptional man – an icon of justice, reconciliation and social equality.

“Actually it was such an amazing thing; this is a man who spent 27 years in jail and he was able to come out of jail and forgive the people that were ruthless towards him,” said Mulati, who originates from Uganda and Tanzania.

Shian Ireland of Belize City tearfully mourned Mandela’s loss, as she signed the book. She recalled hearing the story of Mandela from her grandparents, and she told us that the news of his death ripped her apart inside. On Tuesday, five days after his death, her tears were still freshly falling on her face.

“If I had the money, I would be there,” Ireland said.

Yaya Marin-Coleman, UEF Chair, told LOVE TV: “We cannot just say that we know Madiba or that we remember Baba Madiba but we don’t do anything to actually change our lives or other people’s lives in either way. For me, he was very significant and I was fortunate in June of 1990 to be in Los Angeles, California, when he went to the coliseum; so, I got to see him with over 70,000. So, it was very moving. I will never forget it.”

Today, the members of the Community of Latin American and Caribbean States (CELAC) issued a statement saying: “The nations of our region express their most heartfelt condolences to the family of the beloved Madiba, as well as to the Government and the People of the Republic of South Africa.”

They add that, “Nelson Mandela’s resistance and tenacity in the struggle against oppression, racial discrimination and the opprobrious system of apartheid in South Africa made of him a universal symbol of the struggle for freedom and dignity of the human being. His efforts to achieve equality, democracy and full respect for human rights in his country are an inspiration to those fighting for a world where freedom and justice prevail.”

The states added that the nobility of the ideals defended by Mandela in his lifelong struggle will always accompany our dream to build a more just and prosperous Latin America and the Caribbean for all.

At its last business session for 2013, the House of Representatives of Belize today observed a minute of silence in honor of Mandela, who, Prime Minister Dean Barrow said he has described as “history’s last global hero…”

The Book of Condolences will be documented in both hard and electronic copy, for transmission to South Africa at the conclusion of the signing.

Members of the public can continue to add their sentiments and reflections to the book next week.