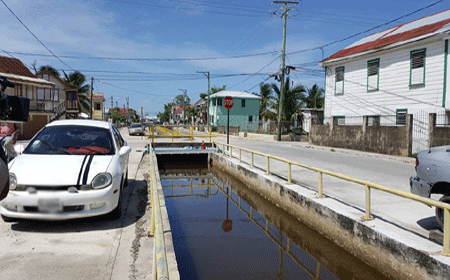 BELIZE CITY, Thurs. July 20, 2017–The body of a full-term, newborn infant was recovered from the East Canal near the South Street Bridge at about 9:00 this morning. The infant was declared dead on the scene by a doctor of the Forensic Unit, who was called to the scene by police.

Police believe that the baby was about two hours old, and an investigation has begun to find the mother.

In an interview with us this morning on the scene on South Street, a resident said that he was at his house when a City Council sanitation worker called him to come out and see something. He thought that he was calling him to see a dead dog, and he hesitated, but the worker insisted, and he went.

The resident saw a plastic bag on the side of the street that contained something that the worker had recovered out of the water with his rake. Because the rake had already torn the bag, however, he was able to see two feet in the bag.

The worker then opened the bag and that was when they saw that it was a baby boy, with its umbilical cord still attached.

There was no scent and no apparent decay of the body, so the baby was apparently recently born. The worker said that they stopped a policeman who was passing on a bicycle, who immediately called a police vehicle, and members of the Forensic Unit also went to the scene.

The worker surmised that, since the current in the canal was coming from the direction of the sea towards South Creek Bridge, the fetus was probably thrown into the canal down towards the sea.

The City Council worker said that he had cleaned the area yesterday, and the baby had not been in the canal at that time.
He said he was saddened by the shocking discovery.