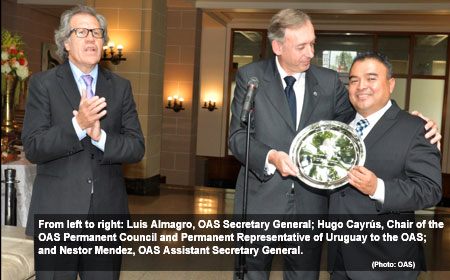 BELIZE CITY, Mon. July 20, 2015–Ambassador Nestor Mendez, the Belizean who was inaugurated on Friday, July 17, as the Assistant Secretary General of the Organization of American States (OAS), has hit the ground running as the new co-pilot of Secretary-General Luis Almagro, whom Mendez thanked for welcoming him as co-secretary general to steer the OAS in the direction which Member States have outlined in the strategic vision for the organization.

Mendez said, “…we must find ways to overcome our challenges and create the enabling environment for economic and social prosperity by identifying new areas of cooperation, creative financing mechanisms and maximizing the catalytic potential of the OAS.”

Under this new OAS administration, the Assistant Secretary General has more autonomy and shares more of the functions of the Secretary General, which demonstrates the level of trust and confidence Almagro is placing in Mendez.

Almagro, who congratulated the new Assistant Secretary General, said: “I have nothing short of great expectations for our work together… There are exciting times ahead and our task is one borne of the trust that has been placed in our hands.”

Mendez, who holds a postgraduate title from George Washington University in International Affairs, was an advisor to the Belize High Commission in London from 1997 to 1999. Nestor Mendez served as Ambassador of Belize to the OAS and to the Government of the United States from June 2008 to July 10, 2015.

On March 18, 2015, Ambassador Mendez was elected to serve as OAS Assistant Secretary General for the period 2015-2020, with 24 of the 34 votes cast. He commenced work at the OAS on Monday, July 13, taking over from Ambassador Albert Ramdin of Suriname, who demitted office on July 12.

“It’s a new job. I have been attending meetings and working as the representative of Belize for many years, but being on the other side of the table, getting familiar with the structure and procedures [here at the OAS] as part of the administration is different. It was a very, very busy week [last week]. This week, we are moving ahead,” Mendez told Amandala this morning.

Mendez told Amandala that he is thankful for all the support he has received from Belize, and he was grateful that Foreign Affairs Minister Wilfred Elrington could be in Washington for his installation, which says a lot about Belize’s commitment to the OAS and which also raises the level of the country’s visibility, he said.

In his speech delivered on Friday, Mendez outlined seven priority areas on which he plans to focus during his tenure: promoting regional inter-connectivity in information and communications technology (ICT), energy, and various modes of transportation; enhancing private-public partnership for economic growth; increasing awareness of climate change; working more closely with the Joint Summit Working Group in order to fulfill the pledges that have been made in the Summits process; expanding focus on youth issues while assigning “goodwill ambassadors” and launching the STARS (Strategic Alliance for Research and Studies) initiative; partnering with the Staff of the General Secretariat and paying close attention to their needs as a staff; and strengthening OAS National Offices by increasing their visibility in the region and outfitting them with the necessary tools to carry out their work.

“You as Member States have expressed your will and have given to this Administration, two initial yet evolving blueprints for the conduct of our work: the first is the Strategic Vision, which sets out the goals and objectives for the Organization’s scope of work. The second, the Strategic Plan for Management Modernization, is supposed to be an operational guideline on how we can reasonably accomplish that scope of work while making the Organisation more effective and productive.

“At this very crucial time when the mettle of the OAS is being tested and there are calls from several quarters for its reinvigoration and adaptability to respond to the 21st century needs of its Member States, our stewardship of this Organization will be judged by how faithfully and skillfully we are able to execute and implement the mandates contained in these blueprints,” Mendez said, in his remarks.

Mendez added that he assumes office at a time when the economic prospects for this region are not as promising as they were a few years ago. He said that the OAS’s ability to deliver and to realize the mandates of Member States will be largely predicated upon the financial resources they are able to access.

He told Amandala that while the OAS has been “in a financial crunch,” he is optimistic that with the modernization of the organization, when member states start to see that they are achieving tangible results, they will be more willing to invest more in the OAS. Also, an enhancement of the private-public partnership, which draws support from private sector entities, will help the OAS to accomplish its aims, he said.

Mendez explained that the OAS budget includes US$84 million in contributions from Member States, and an additional $250 million to $300 million in donor funding for projects which the OAS administers.

Will Belize benefit from the new OAS agenda? Mendez told Amandala that most of those areas identified for focus have been identified as shared challenges across the Caribbean and Central America, and so the issues are very much present in Belize. Those, he said, include the need for greater foreign direct investment, for training, for more programs that focus on youth, as well as climate change awareness.

Mendez’s ascension to the OAS comes at a time when Cuba, which was suspended from the OAS from January 21, 1962, to June 3, 2009, is reestablishing ties with the US. While Cuba has not signaled its intent to rejoin the OAS, Mendez is hopeful that relations between the OAS and Cuba, which participates in Inter-American organizations such as PAHO and IICA, will likewise be enhanced.

Mendez told us that during the coming months, he plans to focus on making on-the-ground contact with member states through national offices, whose profiles he intends to raise during his tenure as OAS Assistant Secretary General.

“It is my hope to build a strong working relationship with each and every Member State in order to ensure that this OAS is attendant to the needs of all,” he said, in concluding his inaugural address.