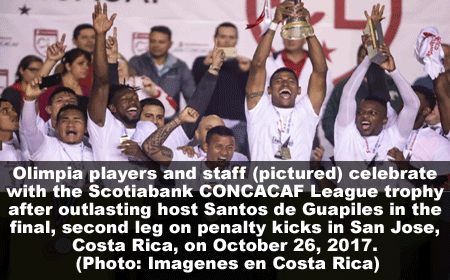 Michael Chirinos scored the second leg’s only goal in the first half, giving the Honduran power a 1-0 win and leveling the series 1-1 on aggregate. The sides went directly to penalty kicks after the final whistle brought the second half to a close.

Olimpia, which lifted its first CONCACAF trophy since the 1988 Champions’ Cup, converted each of its four attempts, while Santos hit the back of the net once in three tries…

With the triumph, Olimpia sealed a spot in next year’s Scotiabank CONCACAF Champions League, becoming the only team to qualify for all 10 editions.

Facebook
Twitter
Pinterest
WhatsApp
Print
Previous articleHome invasion in Ranchito
Next articleDid the US weather service have any impact on Hattie hitting Belize because of project storm fury ?