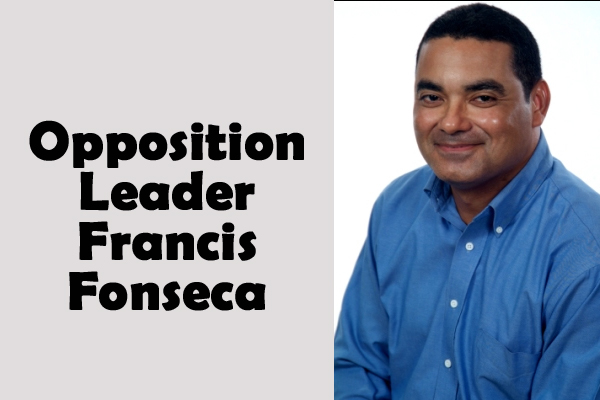 In less than 30 minutes, Opposition Leader Francis Fonseca delivered what Belmopan area representative and Minister of National Security John Saldivar said must have been the shortest reply ever to the national budget presentation made on Friday, March 7, but while Fonseca’s response may have been short on words, it was long on punches.

“The budget for fiscal year 2014-2015 is what many describe as a ‘noodles budget,’” said Opposition Leader Fonseca, the People’s United Party’s representative for Freetown.

Saldivar said that, to the contrary, this is “another wonderful budget for yet another wonderful year to come…” – quite a different picture from that painted by Fonseca, who said that “The Belizean people’s reality is ugly bad!”

Under the government of the ruling United Democratic Party, more and more people line up at the ruling party’s area reps’ offices for handouts – help to buy groceries and pay their bills, the Opposition Leader commented.

He pointed to the job crisis facing women and youth, noting that there are 30,000 people looking for work who can’t find a job.

“The UDP job plan is to send you to break stone on the street. That is their job plan…” said Fonseca.

“Break stone? Is that what he is telling them [his followers] that this is not good enough for them? That it is better for them to go shoot and rob people? Is that the message? There is no indignity in work, in working in the construction industry, in building streets, in mixing cement! The gall of you to come here and try to suggest to our young people out there that there is some indignity in working?” Saldivar retorted. “What kind of signal are you sending to our people? So who will build the streets if there is no dignity in building the streets? Who will pick up the garbage if there is no dignity in working?”

Fonseca said that in Belize, there are 100,000 living on less than $5.50 a day for food, while fuel costs remain at an all-time high, putting a beating on farmers, commuters, fishermen, taxi operators, tour operators and businesses.

He cited the World Bank’s Doing Business Report 2014, in which, he said, Belize ranks at 106 of 189 nations surveyed, down from 2013 and that same report ranks Belize at 167 out of 189 for ease of starting a business, sending a clear message that the process is “bogged down in UDP incompetence and corruption…”

According to Fonseca, his contribution to the budget debate was informed by consultations with the trade unions, business community, churches, student governments and social organizations.

“In 2014, consultation and dialogue with our social and economic partners is not optional—it is an absolute requirement for true meaningful development … this is a UDP government that is disconnected, out of touch and high, high on themselves, and the budget presented on March 7th by the Hon Minister of Finance, the Prime Minister, reflects that disconnect, reflects that arrogance,” Fonseca said.

As for the salary adjustment which Prime Minister Barrow called “the centerpiece” of his new budget, Fonseca said, “This adjustment is long overdue, it is richly deserved by those who have been the subject of disrespect and demonization by those on the other side. Don’t disrespect and demonize our teachers and public officers and come here and boast how you are giving them 5%.”

Fonseca added that, “This is no salary increase—as the public officers and teachers have made clear from the very beginning—they are trying to catch up with real inflation.”

More and more Belizeans have been forced onto a steady diet of Ramen noodles, and on the street every flavor has a minister’s name: chicken is the United Democratic Party’s (UDP) member for Port Loyola, Anthony “Boots” Martinez; beef is the UDP member for Cayo Central, Rene Montero; and the big boss is given the privilege of having the name for shrimp – that is Prime Minister Dean Barrow, Fonseca jested.

Saldivar said that Fonseca’s budget response was merely rhetoric of a party hungry – not for “noodles,” but for power, desperate to get back into power after having not tasted it for eleven (sic) long years [meaning they had not won elections since 2003]. They have to turn to Ramen because there is nothing meaningful for them to criticize with the infrastructure works being done under the UDP administration and with crime having gone down in 2013.

He said that under the UDP administration, GDP has averaged 2% over the last three years. Saldivar said that it has been a tough year for citrus, banana and sugar, and revenues continue to decline sharply, but despite all of that they (the UDP) have still managed to grow the economy, when other countries in this region have been doing worse.

“Belize is in a good place. We were able to grow enough to afford teachers and public officers a 5% raise – the only country in this region and hemisphere that is able to give their people a raise,” Saldivar said.

According to Saldivar, another highlight of this year’s budget is an increase in police housing allowances. Currently, officers at the rank of constables to sergeant get $145 per month and those of the rank of inspectors and above get $195 a month. The new budget adds $3 million so that police officers can get $300 a month towards their rent.

Fonseca said, though, that the 2014-2015 Budget offers no solutions to the serious economic challenges facing Belizeans. It calls for an increasing reliance on tax revenues, and further chokes the private sector out of the real economy, Fonseca added.

The 2014-2015 Budget contains no measures to boost production and it contains no strategy to lower the cost of production, no plan for expanding exports relative to imports, he added.

He said that in 2013, the UDP presided over a 0.7% economic growth, which he said is “the worst economic performance in some 20 years…”

According to Fonseca, “…the 2014-15 Budget offers no change of course, no change in direction – no jobs… no investment strategy, no tax reform, no sense of purpose or direction.”

“Economic data, as you know yourself, forms the basis for analysis of the health of a country’s economy and when you analyze the economic data, what we are faced with in Belize is a country that is on the operating table getting emergency surgery. Taiwan is providing a little oxygen and Venezuela is donating some blood but the patient is in danger of dying under the UDP,” Fonseca said.

He said that while the Prime Minister/Minister of Finance has boasted about reducing the debt-to-GDP ratio, that is just an “empty hollow boast.”