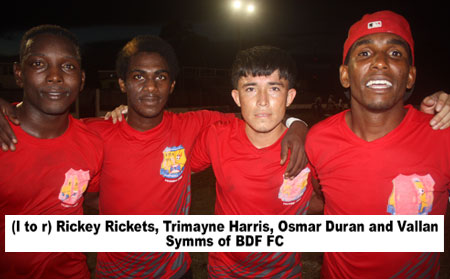 BELIZE CITY, Mon. Oct. 17, 2016–Police United was resting, and the FC Belize home game against Belmopan Bandits FC was postponed due to a number of Bandits players traveling with the national “A” team over the weekend to Valladolid, Mexico; so only three games were played yesterday, Sunday, in Week 10 of the Premier League of Belize (PLB) Opening Season 2016-2017. And for a while, it looked like one of those would be a major upset.

There were no surprises in reports from down south, where Placencia Assassins visited Freedom Fighters FC at the Victor Sanchez Union Field in Punta Gorda, and game away with a 2-0 victory with goal from Dellon Torres (15’) and Justin Linarez 66’). Most fans kind of expected the result, though by a bigger margin, from out west at the Norman Broaster Stadium, where home standing Verdes FC got the 2-1 win over Wagiya FC. Verdes got on the score card first with a Wagiya own goal by Erwin Middleton (17’), and Jarret Davis (24’) increased the lead to 2-0, before Evan Mariano (80’) cut the lead in half for Wagiya.

Here in Belize City, at the MCC Grounds, the final score was a similarly expected 3-1 score in favor of hosts BDF FC over visiting cellar dwellers and still winless Orange Walk FC. But, for well past the halfway mark in yesterday’s encounter at the MCC, the fast improving Orange Walk squad held a 1-nil lead, and with frustration mounting inside the BDF camp, looked like they were on the way to their first win and the season’s first major upset. Orange Walk FC has significantly improved their game since receiving big scores early in the competition. The resilient BDF weathered the storm and rebounded with 3 late goals to claim the 3-1 win; but it was a hard-fought victory against a very good Orange Walk team. Less than five minutes before taking the lead, Orange Walk’s diminutive Brazilian midfield/striker Joao Silva’s lob over the head of BDF goalie Glenford Chimilio had almost crossed the goal line, but for a lunging header by trailing BDF defender Rickey Rickets that saw him tumbling inside the goal, tangled in the nets, and needing to leave the game for a few minutes with a bruised rib. It was a heroic save; but a couple minutes after re-entering the game, it was Rickets, who was assigned to man-to-man marking of Silva, who caused a penalty in trying to stop the penetrating Brazilian inside the eighteen. Joao calmly converted at the 17th minute for the 1-nil Orange Walk lead.

It wasn’t until the 59th minute, that BDF drew level, after a long center from Rickets saw BDF striker Osmar Duran leaping high and heading the ball high over Orange Walk goalie Bryan Hernandez before it dropped into the right corner to tie the score. The go-ahead goal at the 79th minute was a beauty, an absolute rocket from a hard angle some thirty yards out by BDF left winger, Trimayne Harris that caught everyone by surprise, as it ricocheted off the underneath of the cross bar and bounced into the net. The army breathed a sigh of relief some nine minutes later when Vallan Symms (88’) delivered the insurance third goal on a direct kick from thirty-five yards out that avoided the wall and hit the inside of the Orange Walk goalpost.

With 8 more games remaining, Orange Walk FC has served notice by their performance yesterday at the MCC, that they are serious about gaining some points before the season is over.

As tight as the race to the playoffs seems already, every point counts, as can be seen from the Week 10 standings (see below), which will be completed on Wednesday night with the FC Belize vs Belmopan Bandits FC match at the MCC. Bandits and FC Belize drew, 0-0, in their first-round encounter back on August 21. The standings lead will be decided by Wednesday night’s game.