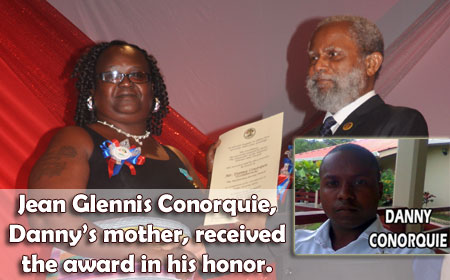 BELIZE CITY, Thurs. Sept. 15, 2016–The Bliss Centre for the Performing Arts was full to capacity tonight as the pre-Independence anniversary celebrations continued with the annual Tribute to Belizean Patriots.

His Excellency, Governor General, Sir Colville Young, the Head of State, presided over tonight’s ceremony, at which 21 outstanding, sterling individuals were honored, some posthumously, who have contributed to Belize’s national development in various fields.

The Governor General was assisted by members of the Belize Defence Force and the Director of Immigration, Diana Locke. The emcee for the occasion was Police Press Officer, Raphael Martinez.

Among the 19 persons who were awarded with Belize’s Meritorious Service Award was Daniel “Danny” Conorquie, who was honored posthumously.

Danny Conorquie’s life was cut short at the very young age of 20. He was born on February 24, 1994 to Jean Glennis Conorquie and Sherman Daniel Williams, who is now deceased. He died on September 25, 2014, when he was shot and killed by Guatemalan bandits who invaded his post at the Caracol Archeological Reserve in the Cayo District. Conorquie, who was serving as a special constable, died defending Belize and the tourists who were visiting on that fateful day.
He attended St. Hilda’s Anglican Primary School in Georgeville, Cayo, and Nazarene High School.

With his ambition to be a leader, Conorquie joined the Cadet Corps in Santa Elena, volunteering for three years. Later, he was put in charge of the Cadet Corps under the leadership of PC Sierra in Georgeville.

Danny followed his dream of service to his country and joined the Tourism Police Unit in Belize City, where he worked until he was transferred to San Ignacio.
Eighteen other Belizeans, listed below, were decorated with the category of award which was bestowed upon Conorquie tonight.

The other category of recognition, the Order of Distinction, was awarded to two persons: Ambassador of Taiwan to Belize Benjamin Ho and Dr. Jane Usher, matriarch of the Holy Redeemer Credit Union. 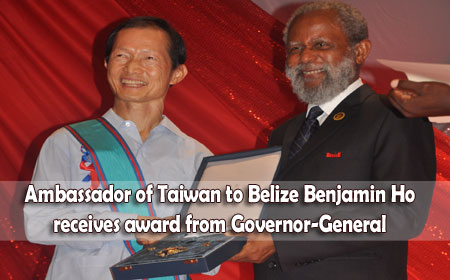 Ambassador Ho was born on September 1, 1952. He entered the diplomatic service of his country, Taiwan, in 1981, where he began service in the Department of Protocol, under the Ministry of Foreign Affairs, Taiwan.

Ambassador Ho quickly climbed the ranks in his country’s diplomatic service and by 1994, he was sent to Belize as Senior First Secretary for the Embassy of the Republic of China. He lived in Belize for four years before he was sent to London and from there, back to Taiwan. He returned to Belize in 2014 as Ambassador of the Republic of China to Belize. He is married and has three children.

Dr. Jane Usher was born to William Cadle Price and Irene Escalante in 1917 and was one of 11 siblings, the oldest being Rt. Hon. George Cadle Price. 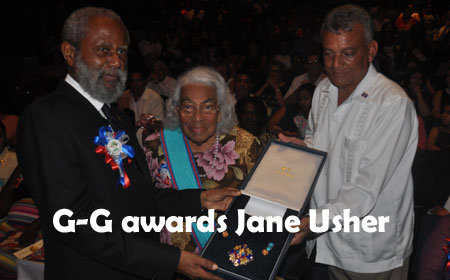 Dr. Jane Usher served Belize as a politician and area representative of the Pickstock constituency for two consecutive terms. She also served as a Cabinet minister and as President of the Senate. Dr. Usher has been recorded in Belize political history as embroidering the first Belizean flag.

“She spearheaded a strong wave of women political consciousness in Belize during her tenure as President of the National Women’s Commission, as CEDAW (Convention on the Elimination of All Forms of Violence Against Women) was adopted into policies and legislation in Belize,” said the official program.

The awardees who received the Meritorious Service award are:

3. Ms. Vilma Bailey (posthumously): For contributions to nursing and health

11. Mr. Mario Muschamp: For contributions to environment and conservation

13. Ms. Mavis Felicia Nunez: For contributions to nursing and health