Pancho out, Audrey in! 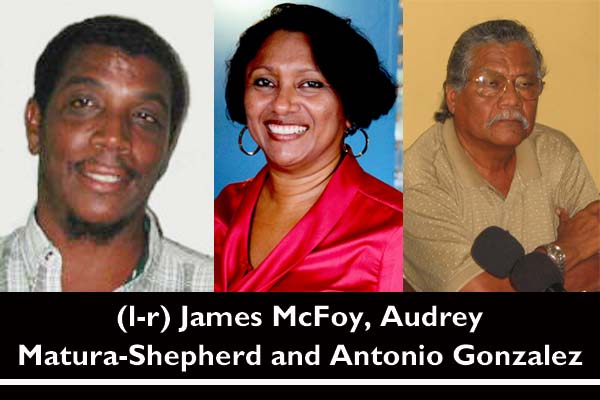 “…the chips will fall where they have to fall:” Audrey Matura-Shepherd

“No regrets…” Gonzalez and McFoy tell the press

The infighting within the Christian Workers Union (CWU) seems to have been quelled with an announcement Thursday afternoon that firebrand attorney Audrey Matura-Shepherd, who recently left her position as Vice President of Oceana in Belize to return to private practice, will be the new president of the CWU going forward.

The CWU held a press conference at its Cemetery Road office in Belize City at 1:00 this afternoon and announced that Antonio “Pancho” Gonzalez, and James McFoy, who have been at the helm of the union for the past decade, would immediately step aside, following calls from the stevedores, a faction of the CWU, demanding that the two men leave their positions.

Gonzalez and McFoy, both present at the press conference, were calm in their composure, as they pledged to continue supporting the work of the CWU. Despite coming under fire from the stevedores over allegations that they failed to properly account for the union’s finances, both Gonzalez and McFoy continue to claim innocence against charges of wrongdoing.

They both told the press today that they have “no regrets” at the moment of their departure from the CWU.

But Matura-Shepherd said that one of the biggest concerns, taking over, is the lack of financial accountability. At the top of her agenda is addressing the problem, “and the chips will fall where they have to fall, when it comes to that…” she told the press.

Shop Steward Basil Brannon of the Central Bank of Belize, who has been nominated as the new vice president, said today that union members were given until Wednesday, December 11, to submit nominations for president, and only Audrey’s name was offered – so when the union meets on Saturday, her presidency will be endorsed, because no one offered an alternative name.

The CWU is holding a special convention this weekend. We understand that the uncontested nominees for the remaining executive posts are existing shop stewards: Basil Brannon for vice president, Stephanie Gongora of the Belize City Council for the post of organizer, and Amy Forte of First Caribbean for treasurer, who will, like Matura-Shepherd, seek endorsement on Saturday. Three trustee positions are also to be filled.

Of note is that the CWU was supposed to install a new executive on October 26, 2013, at a meeting at which nominations were invited up to the day of the vote, but the turnout was not strong enough to meet the required two-thirds quorum.

A rival faction within the union had agreed to postpone the meeting to next February; however, they have since reconsidered and have decided to hold the meeting this weekend.

Gonzalez and McFoy, who were supposed to leave their posts in October, had stayed on, but had indicated that they would not seek re-election.

The CWU confirmed today that the General Secretary will be appointed, but McFoy, we were told, would vacate the office effective today. We were told that as of today, Gonzalez is being immediately replaced by Matura-Shepherd.

Ras Deon Pitter, a stevedore who had been vocal in bringing the plight of the CWU into the spotlight, said that they stand united behind Audrey Matura-Shepherd as the new head.

Matura-Shepherd said that before accepting the request to serve as CWU president – which she was asked to consider three months ago while out shopping—she wanted to know that the fracture that was seen in the CWU could be mended immediately. The stevedores said that “they were willing to back off on the negativity and put their full support” behind her, she informed today.

She told the press that the changes will bring a revival and a people’s movement – a change which the labor force of this country will push forward.

Matura-Shepherd said that she is prepared to serve for one term.

“If there ever comes a time for me that I feel that I cannot get the work done and that the people are happy with a culture of complacency and corruption, well then, I am not ready to be part of that. It’s either we are prepared to move forward and change, or stay back forever…” she said.

We asked Gonzalez and McFoy for their parting thoughts.

Gonzalez noted that the CWU has been one of the most progressive unions in attaining collective bargaining benefits for members. The Collective Bargaining Agreements (CBAs) have served as a model for other sister unions, he said. Gonzalez said that he will continue to champion the rights of workers.

McFoy said that stevedores had approached him to lead the movement, and that is how he became the first president of the CWU. He later engaged Gonzalez, who became the second president.

“Not to beat our chests like Tarzan,” McFoy said, but their (his and Gonzalez’) work has required tireless hours of dedication — leaving family aside, to stay in late night meetings to iron out agreements for workers.

It is not an easy task having 13 entities to negotiate for, McFoy said.

We asked: If financial impropriety is found, will the new CWU executive just draw a line and move forward, or will they seek legal redress?

McFoy was the first to reply, insisting that there is nothing untoward which has transpired with the union’s finances. Despite previous reports that there are major gaps in the records, McFoy told us today that, “All the records are together now.”

For her part, Matura-Shepherd said, “I want everybody to know that for me coming on board is not to seek blood from anyone or to go on a witch hunt, but I will always maintain my standard of being a professional.”

The National Trade Union Congress of Belize this year moved to expel the union, and Matura-Shepherd expressed confidence today that they would be reintegrated into the Congress.

We note that due to the CWU’s expulsion, there will be no NTUCB oversight at this weekend’s meeting.

The NTUCB has indicated to us that it is not yet prepared to comment on the latest development. We were told that the Congress has not received any formal notification of the CWU’s decision to install Audrey as president.