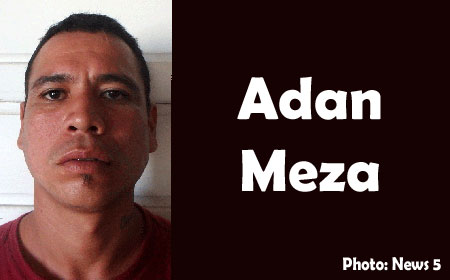 COROZAL TOWN, Tues. Dec. 15, 2015–Paraiso resident, Adan Meza, 29, has been remanded to the Belize Central Prison today on a charge of murder for the stabbing death of Alberto Briceño, 22, also of Paraiso.

Meza was taken to the Corozal Magistrate’s Court today, where he was arraigned for the offence.

Police charge that at about 9:30 Saturday night, Briceno was socializing at a fair that was being held in the village, when he was attacked and stabbed by Meza.

Superintendent Dennis Arnold, Commander of Corozal police, reported that Meza stabbed Briceño six times: in the center of the chest, the left side of chest and the center of the abdomen, and three times in the back. Briceño also was cut twice on the left wrist.

Briceño was taken to the Corozal Town Hospital, where he died about 25 minutes later, as doctors were trying to help him.

Witnesses who were present at the fair told police that Meza and his brother Raul were dancing and Briceño was going to the stand to buy juice, and shoved Meza’s brother who was dancing in his path, causing him to fall down. The witnesses reported that there was no argument or hard talk, but Meza quickly attacked Briceño, and when he fell down, Meza took out a knife from his pants and stabbed him several times.

Briceño’s sister, who was present and saw what was happening, tried to intervene and tried to stop Meza from stabbing her brother, but he intimidated her with the knife and she ran for their mother, while Meza continued to stab Briceño.

Briceño’s devastated mother went to the scene and saw her injured son before he was taken to the hospital.

Superintendent Arnold said that Meza was arrested about 5 minutes after he stabbed Briceño.

Adan Meza is well-known to police. In 2011, while he was serving a 5-year prison sentence for armed robbery, he managed to escape from the Belize Central Prison. Police reported that he was working on the farm in the yard of the prison when he managed to sneak away and escape.

It took prison officials about ten minutes to realize that Meza had escaped. Immediately, they and the police set up checkpoints in Burrell Boom and Hattieville, and around 10:00 on Tuesday morning, January 17, Meza was recaptured near the Burrell Boom Bridge and returned to his cell in the Belize Central Prison to continue serving his sentence.

On October 12, 2015, Amandala reported that on Saturday night, October 3, Adan Meza chopped Guinea Grass resident, Antonio Zepeda, 24, in the head because he said he could not buy rum for him in a bar in Guinea Grass that night. Meza escaped from the area after chopping Zepeda.

Zepeda was taken to the Northern Regional Hospital, where he was admitted to ward in a serious but stable condition.

Meza was arrested at his house and taken to the Orange Walk Police Station, where he was charged with aggravated assault and grievous harm.

On Tuesday, October 6, Meza was taken to the Orange Walk Magistrate’s Court, where he was arraigned on the charges and he was remanded to the Belize Central Prison until December 6. On that day, he was returned to court, where he was offered bail and was released.

Less than a week after he was released on bail for chopping Zepeda, he allegedly attacked and stabbed Briceño to death. He has been remanded to jail for this murder and his bail revoked for Zepeda’s chopping.