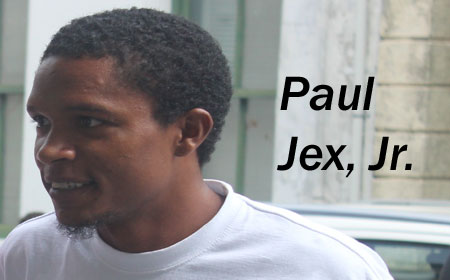 BELIZE CITY, Mon. July 4, 2016–Paul Jex, Jr., one of 18 persons who are facing criminal charges in relation to the December 3, 2015 home invasion in Burrell Boom of the residence of Lebanese Consul General Sarkis Bou Nehra, appeared today, Monday, at the Belize City Magistrate’s Court and was charged with one count of rape stemming from that same incident, in connection with which he had previously only been charged with handling stolen goods.

Initially, when the incident occurred, police had charged Tyrone Meighan with the rape that allegedly occurred during the home invasion. The rape charge against Meighan, however, was withdrawn two weeks ago, his attorney confirmed on Friday, July 1, and it appears that the rape charge that has now been brought against Jex is based on forensic evidence linking him to the rape victim. (See story on page 7 in Amandala.)

Jex, Jr., 21, appeared before Magistrate Emmerita Anderson, who was handling matters for Chief Magistrate Ann Marie Smith, and no plea was taken from him after the charge was read to him.

The court prosecutor, Corporal Christopher Smith, told Magistrate Anderson that police have several more charges that they will lay against Jex, who will be returned to court tomorrow, Tuesday, when the question of bail will be considered.

Jerson Grinage, Brandon Baptist, John Grinage and Randolph Coleman were all charged with aggravated burglary for allegedly entering the home of Bou Nehra.

Crystal Augustine, Ashanti Roches and Kamesha Cacho were the first women to be charged – more were later charged – along with Meighan, Coleman, the Grinage brothers, and Baptist for handling stolen goods.

A note of interest is that all this new development in the police’s investigation is occurring after the case had already been set for case management from March/April in Court # 1 before the Chief Magistrate, Anne Marie Smith.

Paul Jex, Jr., was released on Supreme Court bail for the handling stolen goods charge which was brought against him last year.

Bou Nehra was reportedly out of the country when the home invasion occurred.