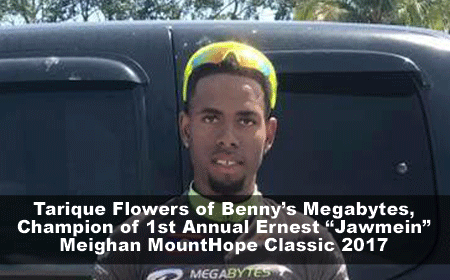 BELIZE CITY, Mon. Mar. 27, 2017–Our sports desk was delighted to receive an email today from renowned female champion cyclist Kaya Cattouse, along with an article which we publish below.

BELIZE CITY, Mon. Mar. 27, 2017-As we approach Cross Country season, the Mount Hope Classic is always a testing meter to determine the level of our local athletes for the Big Dance. This race is only 28 miles shorter than the Annual Holy Saturday Cross Country Classic.

In 2014, Marlon Castillo won the Mt. Hope Classic, and was the first Belizean to finish on Holy Saturday. In 2015, Brandon Cattouse won this race, but missed the break-away on Holy Saturday, so he was a no-show on the podium. In 2016, Nissan Arana won, and was in the lead 6-man break-away up until Mile 29 on the return. So, while the Mt. Hope Classic allows managers to decipher who should be the “bacon men” and who should be the “domestiques” going into Holy Saturday, it also gives the cycling fans an idea of which Belizeans will be most likely to deliver a local victory on the big day.

Yesterday, the race started at 8:00 a.m. from in front of Leslie’s Imports en route to Mt. Hope and back, with 56 cyclists from the major local teams at the line – Digicell-4G, Westrac Alliance, Benny’s Megabytes, Smart, Imani’s, and Smart Jr. Of course, there were also all the unattached guys (cyclists who aren’t on a team).

The first attack came from Herman “Hijo” Requena of Westrac Alliance. This attack quickly formed a break at Mile 5 consisting of 10 cyclists – Hijo and Keion Robateau from Westrac, Phillip Leslie and Mark Staine of Smart, Tarique Flowers and Ron McKenzie of Benny’s Megabytes, Jose Choto and Jesmar Guerra of Imani’s, Erwin Middleton of Digicell, and Quinton Hamilton riding unattached. As usual, for whatever reasons, there are some dodgers from pacing in any break-away; in this case, it was the Smart guys – Leslie and Staine. This caused gaps in the pace line, which led to Tarique Flowers attacking to close the gaps, and subsequently eliminating Ron McKenzie from this group before even entering Hattieville. So, what was 10 now became 9.

At Mile 42 going, there were four guys trying to bridge the gap to the leaders – Joslyn Chavarria, Jr. of Digicell, Zamir Guerra of Smart, Ernest Bradley riding unattached, and Ernest Banner, a junior cyclist of Imani’s, who was unfortunate enough to suffer a puncture before making it across to the break; and because of the distance between the groups, he could not get a wheel change quick enough. This consequently ended the race for young Ernest Banner. The other 3 made it across to the 9-man lead group, making it a 12-man break-away.

At Mile 44, Geovanni Choto of Imani’s and Nissan Arana of Westrac Alliance caught up to the leaders. This new addition formed the 14-man lead group that would go all the way to Roaring Creek together. At Garbutt Service Station in Roaring Creek, the jostling for the station prize resulted in other attacks from the guys. Joslyn Chavarria attacked up the “double hill,” and he was followed by Masters cyclist, Jose Choto. When a little gap was formed, this prompted Tarique Flowers to quickly jump across. All these movements uphill resulted in Herman Requena being the first to get dropped from the leaders. The lead group was now down to 13.

In the peloton, it must be mentioned that unattached rider Tariq Cano was doing the majority of the chasing in an effort to try and regain contact with the leaders. Because every team had representation up front, no one was as adamant as Cano to set chase.

There was a representative from every team in the lead group – Phillip Leslie, Zamir Guerra and Mark Staine of Smart; Tarique Flowers of Benny’s Megabytes; Joslyn Chavarria and Erwin Middleton of Digicell; Jose Choto, Geovanni Choto and Jesmar Guerra of Imani’s; Keion Robateau and Nissan Arana of Westrac Alliance; Quinton Hamilton riding unattached; and Ernest Bradley also riding unattached. Notably, Digicell-4G and Smart did not have their known “bacon men” in this break-away – big names like Giovanni Lovell, Joel Borland, Oscar Quiroz and Brandon Cattouse.

The 13-man lead group made it all the way to the bottom of the monumental Mt. Hope together. Phillip Leslie was eliminated from the group when his pedal arm broke off from his crank-set at the bottom of the climb. Jose Choto went all-out for the station prize at the top of the hill, which was also the return point. Choto was the first to the top, followed by U-23 phenomenon Tarique Flowers, then Geovanni Choto, Joslyn Chavarria, Zamir Guerra, Nissan Arana, Ernest Bradley, Erwin Middleton, Keion Robateau, Jesmar Guerra and Quinton Hamilton. This sprint to the hill-top revealed that Mark Staine is no climber, as he was also left behind. What was 13 now became 11, and this meant trouble for the Smart Team, only having 1 representative left in the lead group.

(To be continued in the next issue of the Amandala)