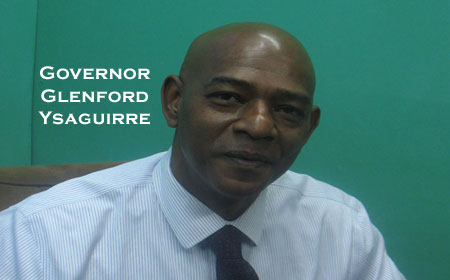 BELIZE CITY, Thurs. July 28, 2016–A demand from British billionaire Michael Ashcroft to have the Government of Belize pay US$70 million more to him in foreign currency, rather than the $134.9 million paid to him in Belize currency a couple of weeks ago, could push Belize to the brink of devaluation if the Central Bank of Belize accedes to a request from the Government of Belize to obtain the foreign currency.

The dispute between the parties is going before the Caribbean Court of Justice (CCJ), for a decision, but Central Bank Governor Glenford Ysaguirre wrote Financial Secretary Joseph Waight last Friday, January 22, warning of the “catastrophic” outcome that would be visited upon the country.

On Monday, July 25, Waight told Amandala that the Government of Belize paid US$29.5 million and BZD$134.9 million in compensation, plus 827,000 British pounds in legal fees and 33,000 Euros in arbitration costs.

However, the Ashcroft group wants the funds that were paid in BZ dollars to be paid instead in US dollars.

A letter to the Government from Ysaguirre said that, “the Central Bank would not be able to provide the additional US$70 million” and to do so would mean that Belize’s US dollar position would shrink from US$422 million to US$159 million, or 1.5 months of imports, which is half the international benchmark of 3 months. Ysaguirre said the result “would be destructive for the economy of Belize.”

“When reserves are inadequate, growth is strangled: an unacceptable state of affairs in a country which has a 40% poverty rate and a very open economy… In the absence of foreign exchange, our economy suffocates, resulting in increased poverty, crime, and risk that we won’t be able to meet obligations to other creditors and trading partners…” he commented.

Current demands for US dollars from the private sector amount to US$193 million, Ysaguirre wrote.

Hinting of the risk of devaluation, he went on to say that, “Without domestic adjustments and increased inflows, it is going to be very difficult, if not impossible, for the Bank to protect the exchange rate peg of BZ$2 to US$1…”

Belize has maintained the peg since 1974 and the Central Bank is responsible for taking action to protect the peg, such as keeping a healthy level of US dollars in reserve.

PetroCaribe is winding down, even as sales of Belize crude have fallen to new lows. Belize’s foreign currency position had already deteriorated substantially since last year, by 20%, or over $100 million, and according to Ysaguirre, the private sector, including exporters and banks, are already demanding a huge chunk of the reserves.

Belize’s export sectors—which bring US dollars into Belize — have been on a persistent decline, with citrus currently being the commodity to hold the strain. Although it had been reported that tourism numbers are up, Ysaguirre noted that tourism services providers have been bringing in less US dollars than expected. Although the sector is reported to have grown by 16%, the amount of US dollars which flowed into Belize barely increased, by a growth rate of less than a percent.

The problems are exacerbated by the loss of correspondent banking—which may be a reason why investors are choosing to keep their money abroad.

Furthermore, Ysaguirre reported that foreign investors who export from Belize had been asking for funds to repatriate. He said that “certain foreign-owned entities” want to remove US$96 mil from Belize.

There are several others in queue, also demanding US dollars. Among them are creditors to the Government of Belize, including bondholders who are due US$13.2 million in interest from the total debt obligations this year of US$45 million.

Ysaguirre also explained how the severing of Belizean banks (by US banks) has worsened Belize’s position.

He warned that, “The offshore sector is also in jeopardy, due to the correspondent banking relationships (CBR) situation, and several banks had recently approached the Central Bank for short-term liquidity loans totaling some US$40 million as a temporary option. So far, the Central Bank has resisted these requests, but it must nonetheless stand ready to assist as the lender of last resort…”

Ysaguirre said that even without the demand from the Ashcroft Alliance, the International Monetary Fund (IMF) and the Central Bank are already projecting a sharp downward trend for the reserves in the short and medium term. This year’s report by the Fund (IMF) on Belize, warned that, “International reserves could decline to uncomfortable levels, especially if compensation for the nationalized utilities is paid and repatriated.”