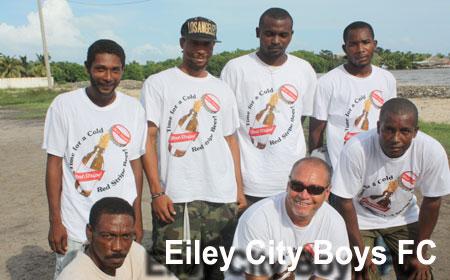 BELIZE CITY–By request of the players, the 5-A-Side Phillip Willoughby Cup tournament games are being played 30-30 (30 minute halves) instead of 25-25 as previously planned. Starting at 11:00 a.m., all 10 registered teams saw action yesterday, Monday, October 13, with a number of fans turning out at the Yabra Football Field.

The goals are 4-foot squares; the playing field is marked out at 60 yards long by 40 yards wide; and there is a 10-yard arc in front of each goal, restricting attackers from shooting inside the arc, and defenders from “posting up.”

A number of teams still feature “semipro” players, who will have to be replaced on their team’s 8-man roster whenever they have signed up to participate in the upcoming Premier League of Belize Opening Season competition, which is said to commence this coming weekend.

In yesterday’s opener at Yabra, Rangers got the 5-3 win over Honduras with 2 goals from Jaime Dominguez and 1 apiece from Steve Mayen, Reynaldo Dominguez and Henry Veliz; while for Honduras, Carlos Armando struck twice and Armin Bados got the other.

In Game 4, Silent Assassin crushed Kulture, 6-1, with goals 2 goals apiece from Kareem Flowers and Lloyd Mangal, and 1 each from Kenrock Robinson and Albert Caretela; while Steve “Gellies” Young scored the only goal for Kulture.

At the end of Week 2, Silent Assassin and Eiley FC are the only teams still undefeated.