BELIZE CITY, Mon. Aug. 21, 2017–Already, Week 2 is in the books for the Premier League of Belize (PLB) 2017-2018 Opening Season, and Verdes FC jumps in front with a perfect record of two wins from their first two outings, while Wagiya starts off where they left off in last season, at the bottom of the heap with two losses. (See standings below.)

On Saturday night at Ambergris Stadium, newcomer hosts San Pedro Pirates FC played to a 1-1 draw with visiting BDF FC. Hector Martinez scored for San Pedro, while Jarren Lambey tallied for BDF. Meanwhile, down south at the M.A. Stadium in Independence, it was also 1-1 between Placencia Assassins FC and visiting Bandits Sports from Belmopan. Kervin Johnson (49’) put the Bandits in front, but Luis “Baaka” Torres (69’ PK) equalized for Placencia from the penalty spot. 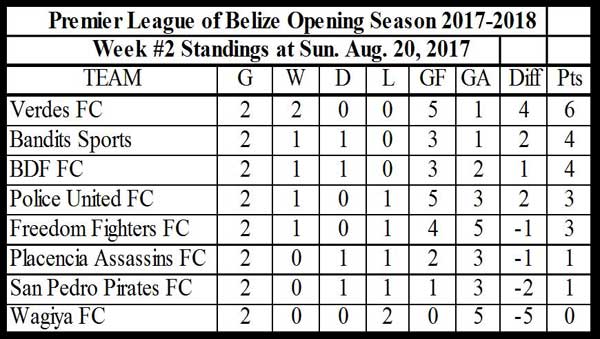 Week 3 schedule (times to be confirmed):