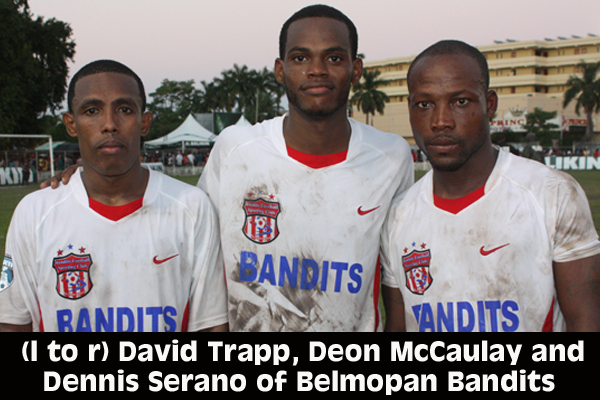 Game 1 in the Finals of the Premier League of Belize’s Belikin Cup Opening Season 2013-2014, between home standing #4 seed FC Belize and visiting #1 seed Belmopan Bandits FC, ended in a 1-1 stalemate yesterday evening at the MCC Grounds. In front of a massive crowd with vuvuzela horns blowing, the Bandits took the lead early on a 5th minute strike from Deon McCaulay, kicking into the southern “ragamuffin” goal, from off a centering pass from the right side by midfielder David Trapp. The FC Belize defence appeared unsettled early in the game, and they hesitated just long enough for Deon to grab the opportunity and send a sharp grounder that caromed off the inside of the right goal post, past a diving Glenford Chimilio in goal for FC Belize. The equalizer for FC Belize came at the 17th minute of second half (62’), off a similar play, as it was FC Belize’s Stephen “Breds” Baizer serving the center across goal from the right goal line for an advancing Mark “Kelo” Leslie to slap in the equalizer past the Bandits’ Woodrow West from point blank range.

Both teams maintained a solid defensive posture, with their most effective efforts coming off quick counter-attacks. FC Belize’s equalizer was particularly instructive, as it followed two consecutive shots on their goal by Deon McCaulay, one with his right foot and the other his left, both being rejected by Chimilio; and the quick outlet after the second save saw Kelo sprinting down the center of the field, sending a long pass to Breds on the right wing, and Breds ran the line and centered for Kelo to finish with his right foot.

It was a beautiful day for football, and the MCC looked the best it has looked in some time, although the players will tell you that the turf under the grass is still far from smooth.

The championship will be decided this coming Saturday night as both teams go at it again, the new capital versus the old capital. In their first regular season meeting at the MCC, it was a nil-nil affair, and their second regular season clash saw FC Belize coming away with a 3-2 win at the Isidoro Beaton Stadium. Bandits protested the game on the grounds of some unpaid fees for yellow cards received by some FC Belize players; but the protest was unsuccessful. That is now “water under the bridge”, and all matters will be settled this Saturday in Belmopan. An even bigger crowd than at the MCC is anticipated; and whoever wins, Belize football will be a big winner if the “man in the middle” does another splendid job, as did referee Irfan Basdemir at the MCC yesterday.