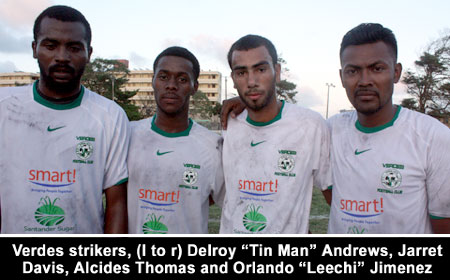 BELIZE CITY, Mon. Apr. 13, 2015–The Premier League of Belize Closing Season wrapped up its regular season over the weekend, and with the final games yesterday, the top 4 teams and their seeding have been determined for the playoffs which get under way on Wednesday of this week.

In a ruling made on Friday by the Disciplinary Committee, FC Belize, who defaulted to Police United on Wednesday of last week, was suspended from the rest of the tournament, so their scheduled Saturday night game was awarded to Belmopan Bandits with a (3-0) score applied.

The last 3 regular season games were played yesterday, Sunday. At the Carl Ramos Stadium in Dangriga, home standing Wagiya defended home turf with a 3-2 win over Placencia Texmar Assassins. Meanwhile, at the Norman Broaster Stadium in San Ignacio, the home team was not so fortunate, as visiting Police United bombed San Ignacio United by a 6-1 margin.

Here at the MCC Grounds in Belize City, with their home team out of the competition, Belize City fans got their last treat of the Closing Season, as BDF elected to host Verdes FC in the old capital. And, after a scoreless first half, it was Verdes FC who came away with the 2-0 victory with goals from Orlando “Leechi” Jimenez (74’), off a free kick from Delroy “Tin Man” Andrews, and a beautiful give-and-go between Jarret Davis and Brazilian striker Alcides Thomas (88’) who finished with a tap-in past Tevin Gamboa in goal for BDF.

The top 4 teams (see final regular season standings below) will now enter a double round-robin playoff, with games being played on Wednesdays and Sundays of each week. Thereafter, the top 2 teams meet in the finals series.

Of the teams that didn’t make the playoffs this season, the big surprise has to be the young newcomers, Wagiya, who finished with a flourish; and the big disappointment is undoubtedly FC Belize, the only team from the once dominant Belize City, who, despite playing some very competitive games, in the end collapsed due to financial difficulties, not helped by the disaster suffered for long without a home field.