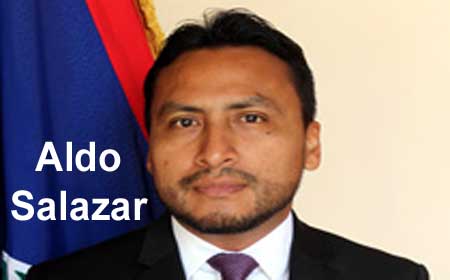 BELMOPAN, Cayo District, Thurs. Sept. 14, 2017–Operatives and officials of the United Democratic Party (UDP) have long clamored for the discontinuation of the Senate Select Committee hearings. The hearings have been so distasteful to the ruling party that their chairman, Alberto August, along with Brian “Yellow Man” Audinett and other party supporters, had disrupted one of the sittings in May.

It has indeed been uncomfortable for the party that came to power on a mandate of transparency and accountability, to see its own, prominent UDP figures like Elvin Penner, Anthony “Boots” Martinez, and Edmund “Clear Di Land” Castro, squirming before the committee as massive irregularities and illegalities documented in the Auditor General’s special audit of the Immigration Department for the period 2011-2013, were discussed.

Last week the UDP announced an official effort to discontinue the sittings of the committee. Prime Minister and Minister of Finance, Dean Barrow, wrote the Clerk of the National Assembly Clerk, informing him that the Government of Belize would not be providing any more funding for the hearings if these continue past November.

The Belize National Teachers Union (BNTU), which had championed the establishment of the Senate Select Committee, has responded to PM Barrow in a press release.

“The Prime Minister has now ‘claimed’ GOB’s inability to continue funding the work of the Senate Committee, beyond November 2017, by citing financial constraints, due to the institution of the Integrity Commission and UNCAC. However, we are yet to see work and results coming out of ANY of the two aforementioned entities…” the statement said.

The statement continued, “…The BNTU sees this as yet another effort to hoodwink the BNTU in particular and the Belize people in general.”

The BNTU asserted that it would not, “sit idly by and allow this process to be derailed before it comes to its natural conclusion.”

At the conclusion of its statement the BNTU reminded the Prime Minister that their strike was simply “on hold”.

Many in the Opposition, the People’s United Party, have expressed the view that members of the United Democratic Party desperately want to stop the political hemorrhaging caused by the hearings, to ensure the party stands a fair chance in the municipal elections scheduled for next March.

On Wednesday, the media asked UDP Senator and Chairman of the Senate Select Committee, Aldo Salazar his views on the Prime Minister’s declarations.

Salazar responded, “The Prime Minister is free to express and hold the view that he feels that we’ve had ample time, and we’ve been allocated adequate resources, and he feels that that should be sufficient.”

“We don’t have to quarrel with him about that. That is his view, he is entitled to that,” he further said.

“It is not an unreasonable view; we have been at this for quite some time. I certainly share that view as well. We’ve had significant amount of time to deliberate on this and I’ve said from the very beginning I feel that we should be looking to wrap up, and that adequate time has been allocated,” Salazar remarked.

“I know that there are those who would like to see the work wrapped up as quickly as possible,” Lizarraga said. “But I don’t think that the majority of us are in any way desirous of rushing through and finishing, just for the sake of finishing. We want to ensure that we, at the end of the day, discuss all that needs to be discussed, and that we unearth all that we can, and that our report is at the end of the day going to be something that would be beneficial…,” he said.

Lizarraga went on to note, “Priorities in this country, for the most part, unfortunately, are given to those projects or areas that carry the most political weight. I was disappointed to hear today, for example, from the Director of Immigration, that some of the items she needs to strengthen her department were not approved in her budget last year. And here we are in the middle of this very important exercise, and she’s being denied the resources that she needs to strengthen a vital part of our national security, which is our identification documents. We still hear that we await allocations for the new passport system that is going to be identified. So it is disappointing to see how we prioritize the spending of our national monies.”

“The Belizean people will have to decide if this is more important,” Lizarraga added. “We seem to find 30-odd million dollars when we want to build a basketball court and a stadium. We seem to find tens of millions of dollars to spend on a stadium that’s not completed, that’s not been completed for years. And you can’t find a few hundred thousand dollars to finish the work, to make sure that we have less incidents of human trafficking, less incidents of money laundering, less incidents of persons coming and abusing our nationality process and disenfranchising Belizeans from activities that they can do,” he said.

Facebook
Twitter
Pinterest
WhatsApp
Print
Previous articleRIGHT TO THE POINT: Pro-corruption supporters emboldened
Next articleCase against accused murderer will crash if key witness is not located