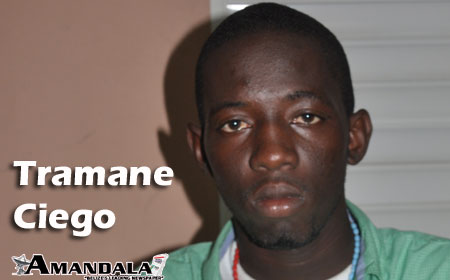 BELIZE CITY–In the southside of Belize City, to be on the streets sometimes at night could place one at high risk, especially if you are a young black man, since the odds are high that you will become the subject of the police’s oftentimes unnecessary and unconstitutional searches which are too often lacking in basic human decency, not to mention the legal requirement of at least, “probable cause.”

Just a young black man’s presence on the streets appears to give the rogue elements in the Police Department license to violate his constitutional rights.

On Sunday night, two policemen who were on foot patrol on Central American Boulevard allegedly acted criminally toward a young working black man. According to the victim, Tramane Ciego, who, ironically, lives in close proximity to the police’s Precinct 2, on Racoon Street, one of the officers went as far as to threaten to kill him. To its credit, however, the Police Department’s Professional Standards Branch acted promptly in its investigation of a report made by Ciego.

In a police press release issued today, Thursday, it was reported that “On 29.09.14 at about 11:00 a.m., PSB received information that Tramane Ciego, gas pump attendant of a Racoon Street address, had filed a report of police brutality at Precinct Two, reporting that two officers approached him on Central American Boulevard near North Creek, one of whom pointed a firearm at him, searched him and punched him in the face.

“He was also reportedly kicked in the chest, causing him to fall into the drain.

“During the process, he reported that $490 was taken away from him.”

“As a result, PC #1595 Edgar Depaz and PC #1345 Jefferson Dawson were arrested and were later charged jointly with robbery and wounding, and Dawson was additionally charged with threatening words and aggravated assault,” said the police press release.

Assistant Superintendent of Police Glen Rivero confirmed to Amandala yesterday, Wednesday, that the two accused officers are still in police custody, pending their arraignment on the charges at the Belize City Magistrate’s Court.

According to Rivero, the officers have been charged with armed robbery, which carries an automatic remand to prison for up to 90 days, unless Supreme Court bail is obtained before that prescribed remand time.

The Professional Standards Branch has its hands full, because at least a half dozen more reports about police excesses are currently under investigation.

On Wednesday, police detained and charged another police officer. According to the same police report, “a search of a house was conducted on #18 Antelope Street, where the owner reported that some of her jewelry was missing.

“A search was conducted and PC #1096 Jamille Scott was later apprehended, along with a female companion, with the missing items. He has since been detained pending charges of theft and handling stolen goods.”

It is expected that Scott will be arraigned in court by tomorrow, Friday.

The police report of today, Thursday, October 2, additionally reports that: “On 08.09.14 at about 9:30 a.m., Professional Standards Branch Personnel (PSB) received a complaint from 19-year-old Armanhni Bailey presently residing at #189 West Canal in Belize City. He reported that on 06.09.14 between 12:30 p.m. and 12:45 p.m., he was taken from inside his yard by two police officers and placed in the rear portion of a black vehicle.

“He reported that he was taken on a dirt road off the George Price Highway, where he was taken out the vehicle by the officers, who reportedly punched him several times in the abdomen, once on the left side of face and once in his mouth.

“Then they both picked him up and threw him into a green garbage dumpster that was on the side of the dirt road.

“PSB personnel conducted an investigation into the matter, where both Police Constable (PC) #1416 Larry Sutherland and PC #1058 Wayne Trapp were subsequently charged disciplinarily with one count of ‘Is Uncivil when on duty’.

“PC Larry Sutherland was additionally charged for one count of ‘Act to Prejudice to Good Order and Discipline,’ as he caused harm to the complainant.”

“This matter is before a Tribunal,” ends that report.

Police did not say whether or not criminal charges would follow the internal tribunal that they have convened on the matter.

Rivero had also said that the two officers involved in the Ciego incident have been subjected to departmental discipline.

“I went home, changed my pants, and went out to buy a fry chicken from King’s Chinese, in the Port Loyola area,” he further recounted.

Ciego, who lives about six houses from the police’s Precinct 2, said he was on his way back home when he ran into the two-man foot patrol, one of whom he knows by name.
Ciego was riding his bicycle and he had not committed any traffic infraction, but the officers stopped him.

“He [one of the officers] cocked his firearm at me and told me that he wanted to do a routine search,” Ciego explained, “I told Jefferson Dawson not to cock his firearm at me.”
“Then I told him, ‘Go through, boss, because I nuh have nothing pan me,’” Ciego said he told the two cops.

“The other policeman, a clear-skinned one whey I no even know, came an punched me in my face. This time Jefferson di search me,” Ciego recalled. “He punch me two times and I drop pan the ground. This time Jefferson hand deh inna mi pocket,” Ciego said, adding that “Right deh he pull out my $490 and I only left with $150. I had $640 on me. I buy one fry chicken, one orange Fanta and one stout.”

“I search my pocket, because I know I have money on me,” Ciego said.

“This time wan trooper come and save my life, because dem mi wan shot me down deh fu no reason. Fu what, $490?” commented Ciego.

Ciego explained that the $490 was his salary that he received from the gas station where he is employed, and the rest of the money in his possession was from one of his friends for renting an apartment.

The young man, who does not even have an arrest record, told Amandala that he never had a problem with the officer who attacked him, who is someone he sees almost every day, given how close he lives to the precinct where the officer is attached.

The mobile patrol which stumbled upon the scene after Ciego had been stamped in the muddy drain was being commanded by a corporal whose professionalism saved Ciego from being detained on what would have been a bogus, trumped-up traffic charge.

Apparently, the officer who pulled the gun on Ciego wanted to justify his actions and told the corporal that he was going to charge Ciego for riding his bicycle up-stop.

“The corporal told him that the bicycle was parked in the right direction. It had on light and bell,” Ciego recalled.

“When they knocked me in the drain, me and my stuff drop inna the drain. I show Channel 7 the chicken I mi gone buy, inna de drain,” Ciego said.

The footage 7News showed in their Monday night newscast showed Ciego going down in the drain to retrieve the food he had gone to buy. It was still tied in the plastic bag, along with the unopened orange Fanta.

Ciego opened the foam plate and counted the four chicken legs he had bought.

Ciego told Amandala that he had applied to join the Belize Defence Force, and was waiting to be called up.

“The big man said they wan call me inna October, but I couldn’t wait until then, so I went and got a job at the gas station,” he said.

Ciego told us that after he graduated from Bethel Primary School, he joined a program at CYDP and in 2009, he began working at a gas station, from which he recently resigned and then applied to the BDF, before landing his present gas station job.

Ciego, who has been working since he was around 18, told us that he wants to hire an attorney to sue the Police Department.

“I have wan lee savings and I no mind work to pay a lawyer to take my case,” Ciego said.