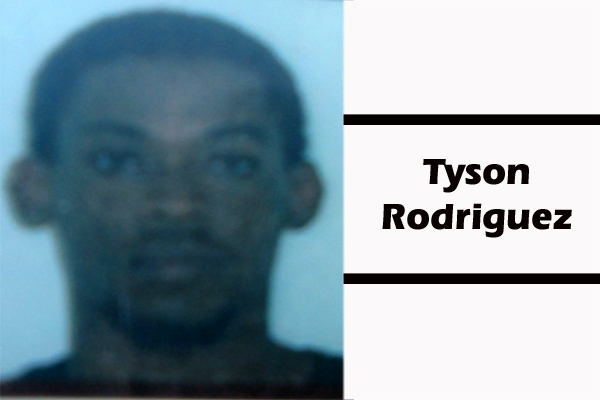 Police say that Rodriguez, whom they say they found floating in water with handcuffs on, was a suspect in a brutal Placencia robbery

A coroner’s report has said that a resident of the Benguche area of Dangriga, Tyson Christopher Rodriguez, 27, a prisoner who police say they found floating and handcuffed in a river in the vicinity of Chabil Mar, about ½ mile south of the newly built police station on the Placencia Road, was suffocated to death.

Police say that Rodriguez was found floating at about 10:45 Friday night, about an hour after he escaped out of a police mobile unit, with his hands handcuffed behind him, but the coroner’s report, by Dr. Mario Estradabran, released by the family’s attorney, Audrey Matura-Shepherd, who, along with a sister of Rodriguez, witnessed the post-mortem, says that the cause of Rodriguez’s death was “asphyxiation by broncheal aspiration sand – beach type and multiple traumatism to chest – trauma type.”

“This means,” Matura-Shepherd said, “that Tyson’s injuries are not consistent with someone escaping from a moving vehicle, nor him trying to swim to escape. Rather, a persons or persons held his head down in the sand until he could not breathe, and thus sand was found in his trachea and bronchial passage.”

Matura-Shepherd also said that there were multiple signs of violence on Rodriguez’s chest and back, and alleged that he had been beaten at the Placencia Police Station.

Police had arrested Tyson Rodriguez in connection with the savage robbery and assault of an elderly Canadian couple in Placencia on Thursday, November 21, 2013.

Keishann Rodriguez, Tyson Rodriguez’s cousin, said that “The family has no problem with the police arresting, charging and even remanding Tyson according to the law, but draw the line whereby they used brutal force … only the police who left with him from the police station can account for how he died, but we now know he was murdered … those police officers want us to believe he escaped and then someone out there killed him, or that he died from drowning, but the physical and medical evidence contradicts their story.”

Police, in their report, said that they pulled Rodriguez from the water and took his body to the Placencia Village Clinic, where a doctor pronounced him dead at 11:00 that Friday night, and then to the Dangriga Hospital, where he was to undergo a post-mortem to certify the cause of his death.

Police said that Rodriguez, who was shot in the back by Caye Caulker police last year while he was running from them, the bullet coming out through the abdomen, was being investigated for a brutal robbery and home invasion that reportedly took place in Placencia.

The police report, of Sunday, November 24, 2013, in toto, said that “On Thursday, November 21, at about 9:00 p.m., Placencia police responded to a robbery report made by David Baier, 59, a Canadian residing in Placencia. Baier reported that on Thursday at about 8:00 p.m., while walking in the Plantation area with his wife, they were viciously attacked by three men of dark complexion, who robbed them of their personal belongings and cash.

“Baier’s wife Sonia, 61, sustained a broken jaw and Baier himself was almost drowned by his attackers, who ducked him several times under water.

“Baier reported that after being beaten, they were forced to take their attackers to their home, where they were tied up and their home burglarized. Stolen were an assortment of jewelry, cash and electronic items.

“The culprits then escaped towards the Southern Highway in the couple’s white GMC Envoy vehicle, bearing licence plate L/P SC-1022.

“As a result, Placencia police sent an all-formation message for police to be on the lookout for the said vehicle.

“On Friday, November 22, at about 9:30 .a.m., police attached to Customs called the Corozal Police Station requesting assistance in pursuing a white GMC Envoy SUV without license plates, occupied by two dark-complexion men which diverted from the Philip Goldson Highway to the Chan Chen Road.

“In response, police officers were deployed to the location and upon reaching about 100 yards into a feeder road off Chan Chen Road between the villages of Xaibe and Patchakan, they met up with Customs patrol, where they discovered the white 2002 GMC Envoy, without license plates, abandoned. No one was found in the vehicle, or in the immediate area.

“While the vehicle was being taken to the Corozal Police Station through Xaibe, Customs officials identified a slimly-built man dressed in white T-shirt and brown short pants who was sitting at the bus stop in Xaibe, near the Xaibe Roman Catholic School, to be one of the male occupants of the Envoy.

“Upon seeing the police, he attempted to evade the authorities by running into the school compound. The police and customs officials, with assistance from the villagers, pursued him into some high bushes adjacent to the school compound. A police officer took out his licensed .9mm pistol and fired a single warning shot in the air, whereby the male person fell to the ground and surrendered. He was identified as 27-year-old Tyson of Dangriga Town.

“He was escorted to the Corozal Police Station along with the found property, the vehicle, which was registered to one David Baier of Placencia. The Envoy SUV was stolen during an aggravated burglary in Placencia on November 21, 2013.

“On arrival at the Placencia Sub-Formation, he was detained and thereafter taken to the Crimes Investigation Branch office to be interviewed at about 10:00 p.m.

“As a result, the area was searched and the team was alerted by two Hispanic men in the area that they saw a man in the water floating in the vicinity of Chabel Mar, about ½ mile south of the Police Station.

“Police went into the water and retrieved the body of a man who was identified as Tyson Rodriguez. Tyson Rodriguez was taken to Dr. Caballero, who pronounced him dead at 10:45 p.m.

“Police have a suspect in custody and are seeking another who they believe can assist in this matter. Based on the circumstances surrounding the sudden death of Tyson Rodriquez, the Commissioner of Police has since launched an internal and criminal investigation into the matter, led by Assistant superintendent of Police Humberto Romero of the Criminal Investigations Branch and assistant Commissioner of Police Noel Leal of the Professional Standards Branch, respectively.”

Matura-Shepherd also said that a man who was picked up in Corozal along with Rodriguez reported that he did not know Rodriguez, and had nothing to do with the robbery in Placencia, for which he was being arrested and investigated. He said he was not with Rodriguez in the mobile unit when he, Rodriguez, was taken away by police.

Matura-Shepherd makes the point that Rodriguez had not tried to escape from the mobile unit, but was in the pan of the truck and he was taken away. She said that the police’s assertion that he escaped from them with his hands handcuffed behind his back made no sense. The area where he was found was shallow, she said, and he could have been easily caught if he was being chased with his hands behind his back.

There was public outrage in March last year after police shot Tyson Rodriguez, who was running from police, reportedly because he had a small quantity of marijuana in his possession. Reports are that about 7:30 Thursday morning, March 29 last year, police on an anti-drug patrol went to Rodriguez’s home in Caye Caulker to conduct anti-drug searches, but when Rodriguez saw them coming, he jumped off his verandah and ran.

Police said that they chased him for about six blocks, in the course of which he got on a bicycle to escape, and an officer fired at him and hit him in the back.

Rodriguez was then arrested and searched. Police found two sticks of marijuana on him. He was then taken to the Karl Heusner Memorial Hospital for treatment.

Tyson Christopher Rodriguez will be buried in Dangriga on Saturday.