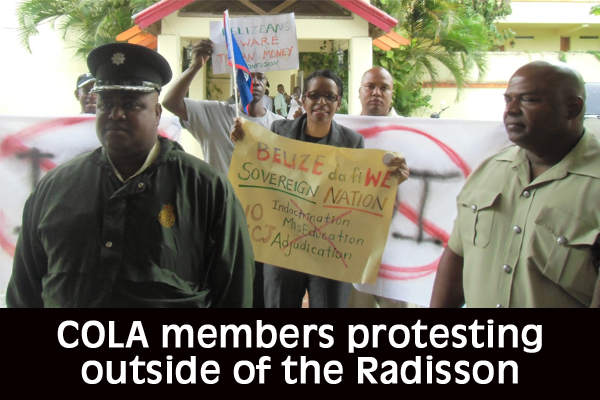 The Citizens Organized for Liberty through Action (COLA) has been anything but silent since the start of discussions of the government taking the Belize-Guatemala territorial dispute to the International Court of Justice (ICJ). COLA stands on its claim that the government should not take the issue to the court because it is not necessary. Members of the organization said that Belize belongs to Belizeans and that is it, there is nothing to dispute.

Members of COLA were present at the Ministry of Foreign Affairs referendum education campaign launch on Wednesday, January 23, 2013. While sitting silently inside of the conference room, the members held flags in their hands with a symbol showing the letters “ICJ” being crossed out in a circle.

President of COLA Giovanni Brackett said that they had no intention of causing any problem during the launch, but were simply there to show their opposition to the issue of going to the ICJ. Brackett said that he and his fellow members were asked to leave the room to avoid any problem, but they refused.

The group was thereafter forced out of the building by police officers.

“Whenever the cameras came around, we didn’t have the flags out, so it would have looked like we were in support of the whole launch if we did not make a statement,” he said. “We didn’t want to disrupt with voice, so what we did, we just kindly lift these (the flags) up… after we lifted it up twice for Channel 7 and Plus TV, one of the head persons in the Special Branch came to me.”

Brackett said he was reluctant to leave, so he explained to the person that they were only going to lift up the flags.

“He asked if we were going to disrupt the Prime Minister’s speech or any one of the speeches.”

“That was not our intention,” Brackett said. “I explained to him our intention, why we had to lift up these flags, so that those who were watching the news tonight can see we were not there in support of this referendum. We were there to show, to listen, to get first-hand information on what they were saying.”

Brackett said it was after they lifted the flags again for Channel 5 to get a shot of them that the said person came back again and asked them to leave. The group refused to leave, so they were then taken from the room by armed police officers.

“I don’t think we have ever been this kind of way that we need people to come to us with guns to enforce that,” he said. “We did not do anything wrong, but I have a question, where is Belize’s democracy going today, after today’s event? Is it diminishing, is this what we’re showing our people right now, that those who oppose going to the ICJ have now been threatened, or we are going to be afraid of voicing our opinion?”

COLA member and activist Wil Maheia said that Belize has too much to lose by going to the ICJ.

“Did you know that Guatemala celebrated when they got Belize to even agree to go to the ICJ?” he said. “They consider that a victory, right. They have nothing to lose, we have everything to lose. We cannot afford to risk our territory or our sea in favor of Guatemala, and no ICJ should be able to determine that to us. So we are totally against going to the ICJ.”

Maheia said that an intimidation method was used against them.

“I call upon the Belizean people not to be intimidated and not to support going to the ICJ, in fact, we should boycott the whole the referendum thing and not go to the ICJ, not even participate in the referendum.”

Maheia said that the government continues to bow to Guatemala and OAS, who has done nothing for the Belizean people.

“There are still border incursions, there are still people coming across the border and the OAS has done nothing to stop those people,” he said.

COLA said that they will carry out their own campaign in which they will encourage people to stay home and not vote in the referendum, and if they do choose to vote, they should vote no.

The Prime Minister said he had no comment on the matter, because he was unaware of the COLA members being removed from the room.