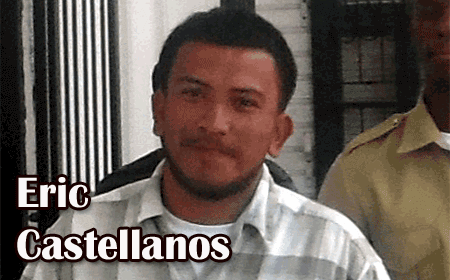 BELIZE CITY, Wed. Apr. 12, 2016–Eric Javier Castillo, 26, who is presently serving time in prison for burglary, was found guilty of drug trafficking for 372 grams (.82 of a pound) of cannabis when his case concluded in the court room of Chief Magistrate Anne Marie Smith.

In her judgment, Chief Magistrate Smith told Castillo that even though there was some discrepancy in one of the prosecution’s witnesses’ testimony, there was sufficient evidence presented to the court to convict him of drug trafficking.

The Chief Magistrate did not give Castillo more jail time, but ordered him to pay $10,000; however, if he fails to pay the fine by December 30, 2016, he will spend five years in prison. Therefore, although Castillo should be out of prison in a month’s time, if he defaults to pay the fine, he will lose his freedom and be confined once again to prison.

Morten Keith Gabb, a prison officer attached to the Quick Response Team at the Kolbe Foundation, in his testimony told the court that on Sunday, April 26, he was posted “at a search area monitoring the movements of inmates, civilians and officers”.

He then left where he was stationed, Gabb said, to get a drink of water at Control 1, at which time he saw Castillo, an inmate, picking up garbage which he found very strange, since he had his own duty to attend to.

Furthermore, Castillo was seen in an area that was restricted to inmates who were assigned to pick up garbage, Gabb said.

Gabb explained that Castillo had been working at Control 1 for the past six months and his duty was to take the luggage received for the inmates from Control 1.

Gabb told Castillo he needed to conduct a search on him, and Castillo complied. However, when Gabb asked for the garbage bag, Castillo was reluctant to hand it over, Gabb said.

Nevertheless, Gabb got the garbage bag and when he searched it, inside he found two parcels wrapped in transparent tape.
Gabb said that he informed his superiors, and thereafter, the Hattieville Police Station was called. Gabb, in his evidence, said that both parcels weighed 372 grams; parcel A weighed 215 grams and parcel B weighed 157 grams.

Castillo, when he had the opportunity to cross-examine, Gabb, said that in the statement he gave to the police he had indicated three, bags of cannabis that were found, and not two.

Also, the total amount of cannabis that was found was said to be 369 grams in Gabb’s statement, and not 372 grams, as he specified in his testimony in the court, Castillo said, reading from the disclosure.

Meanwhile, in his testimony, PC Nathan Arana said he was on duty at the Hattieville Police Station, when information was received that an inmate of the Belize Central Prison was caught with cannabis. Upon arriving at the prison, he was met by Gabb, who handed over Castillo and the drugs, Arana said.

Furthermore, Arana said that while he was weighing the suspected cannabis at the Hattieville Police Station, the accused silently sneaked out the front door of the police station, and was not captured until 7:30 p.m.

Upon Castillo’s capture, Arana said that he resumed weighing the cannabis in front of Castillo. Arana told the Court that parcel A had a total of 215 grams and parcel B had 157 grams, a total of 372 grams.

Arana said that the parcels were sealed and signed by the accused, Castillo, who was then charged with the crime of drug trafficking.