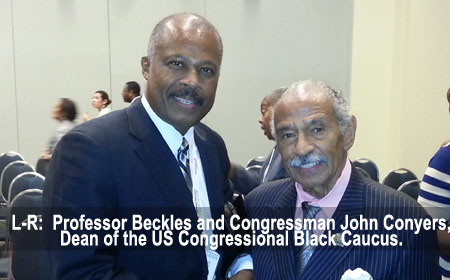 Grateful if you would publish the attached address by Professor Sir Hilary Beckles, Chairman of the CARICOM Reparations Commission, to the Congressional Black Caucus, Washington DC, September 27, 2014.

My host, the extraordinary, John Conyers, Congressman without comparison, other distinguished members of the Congress of the United States of America, members of government, both State and Federal, Excellences of the diplomatic corps, Dr. Julius Garvey, ladies and gentlemen.

I am privileged to be here this afternoon standing in solidarity with this most important organisation, the Congressional Black Caucus of the United States of America. I am honoured to be able to pay respect to all its members in recognition of your historic achievements, contemporary advocacy, and evolving agenda in respect of reparatory justice for all.

It is humbling to be in the company of Congressman Conyers, who for the last 40 years has championed the reparatory justice movement in the Congress of this country, and in the world beyond.

Congressman Conyers is a giant whose footsteps are felt wherever black people continue to feel the pressure and the pain of persistent poverty resulting from the historic crimes of slavery. I celebrate the power of his persistence because we all know that in the volatile world of human progress persistence requires passion, and is the core cause of all achievement. From your Caribbean family, Congressman Conyers, I bring love and respect.

From my homeland Barbados I bring an invitation to our great son, Eric Holder, now retired from President Obama’s inner Cabinet. It’s an invitation to come home; to refresh, to reflect, and return empowered for the struggle to attain full justice here in America. The great Dr. Martin Luther King used to visit Jamaica from time to time for rest and relaxation because he knew that the road ahead was not for the weary.

This afternoon I am merely the messenger of the movement for Caribbean reparatory justice. I am here to solicit your support and solidarity for the initiatives we have taken. My colleagues of the Caribbean Reparations Commission hope that our work will serve to energise your efforts here in America, and to be the basis of bond building from Salem to Suriname that are stronger than the chains with which our ancestors were enslaved.

In the Caribbean we felt in our blood the ferocity that took young life in Ferguson as we feel the oppression in the favelas of Sao Paulo and Rio. The racism I was told about in Brazil a month ago is as real there as it is here, there, and everywhere that our ancestors were criminally enslaved and abandoned in States without citizenship, social dignity, and rights of equal inclusion.

The governments of the Caribbean have joined with civil society in determining that there is a case to answer for these crimes which the United Nations has deemed Crimes against Humanity.

In America you have sought for centuries to civilize and to democratise its living relations because you know that the promise of this land is without parallel in the pages of modernity. You have won the privilege of passage into your Congress, and you saw to the rise and return of the blessed Barack, the barrier breaker, for a second term.

But nowhere, nowhere on the main and its islands have we established reparatory justice for slavery as a civil right, and as a framework for fiscal and financial thinking and action about our future. We cannot end our journey to justice within any illusion of inclusion that seeks to blind us from the greatest of all truth; that this century will be the century of struggle for reparatory justice.

Your esteemed president might not be with you on the political frontier of this fight but his contribution to the community, in the heat of the night, is unprecedented and uplifting. Barack, I have no doubt, will be back!

We know that weak, fragmented and disorganised people never receive reparatory justice. It is because justice of this nature comes inevitable as a political action won in the face of unyielding power that seeks always to pacify and intimidate.

The UN has declared the next decade, 2015-2025 the decade of the African descendant. It has taken a decade of diplomacy to win this decade. Let us in turn declare to the UN, that this will be the decade for the attainment of reparatory justice for African descendants. Let us declare today that we will transform this decade into a destiny with justice for every ancestor enchained by centuries of inhumanity.

To this end, I can think of no better tribute to pay our patron than for this Congressional Black Caucus to declare this decade, “The Conyers Decade for Reparatory Justice”.

The time is upon us to act as one. The great Caribbean scholar, Sir Arthur Lewis, Nobel Laureate in Economics, wrote in 1934, in support of the legendary Marcus Garvey, that the matter of Britain’s 200 years of unpaid slave labour is yet to be addressed. The Caricom Reparations Commission has been established to pursue this claim Sir Arthur urged us not to forget. The Commission has gone about its business and it has forged an unprecedented political alliance between civil society and States.

A month ago I was privileged as Chairman to present the work of this extraordinary Commission to an audience in the British House of Commons. I called upon that honourable House to return to the scene of its historic crimes in order to facilitate committed citizens and over-burdened governments in cleaning up of the colonial mess that has survived because of its monumental magnitude.

I also carried the message of the Commission that our action plan for justice calls for the highest levels of inter-governmental dialogue within the existing framework of development cooperation, and the bilateral and multi-lateral strategies that currently exist between Europe and the Caribbean.

This, my friends, is where we have reached. We are calling for your solidarity and an allocation of your wisdom and friendship. In much the same way that the great Garvey brought to you from the islands our commitment to silence the slavers from the cotton fields, we call upon you to strengthen our claim against the slavers of the sugar cane field.

Declare the Conyers decade, establish a national commission for Reparations, and join us in Antigua for the 2nd Caricom Reparations Conference on October 12-14.

Let us merge our mutual efforts as one force, use this Congress to press for a global summit on reparatory justice, and let our voices echo a common call, the redemption song of reparations, against the pirates who robbed and must now repair.

Mr. Chairman, Honourable Congressman John Conyers, ladies and gentlemen, I thank you for the generosity of your engagement. God’s richest blessings.

Dear Editor, I would like to thank Brother Colin Hyde for paying attention to my letter regarding the plastic ban in Belize. He states that...
Read more
Letters