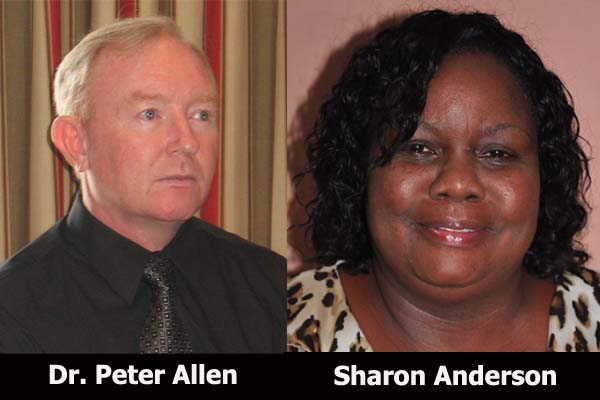 The Public Service Union (PSU) fired off a press release today threatening legal action against Dr. Peter Allen, the Chief Executive Officer in the Ministry of Health, on allegations that Allen had made libelous statements in an e-mail against Chief Pharmacist Sharon Anderson, claiming that she was “holding the system ransom” by going “on strike and refusing to sign” customs entries for supplies to enter the country.

In its statement issued today, Tuesday, the PSU said it “condemns the attack on Ms. Anderson’s character and reputation and will continue to support her in demanding an apology and a retraction of the email. If not forthcoming, legal action will be taken for libel.”

Amandala attempted to speak with Senator Ray Davis, the PSU executive who we understand is handling the case for the PSU, but he told us he was unavailable, because he was in a meeting at the time when we called him.

The Ministry of Health did not issue a retraction. Neither did it issue an apology. It issued what Allen called a “clarification” on the matter.

“You’re standing on that?” we asked CEO Allen.

“I hope I am not standing on thin ice,” Allen responded.

He then added that he has to be careful not to open the Government to possible litigation, which would put taxpayer dollars at stake.

For its part, the PSU takes issue with allegations that Anderson had gone on strike, and we were told by a connected source that she was on approved sick leave due from April 7 to 17.

Allen told us that he sent a memo to the Controller of Customs Gregory Gibson, authorizing the other three officers to sign customs entries, on April 16, which would have been the day before the sick leave was due to expire. He said that since the former drug inspector, Donna El-Amin, left the ministry this January, only Anderson was authorized to sign.

Allen said that entries must have three Government signatures. Apart from approval by the pharmacist, signatures are also required from finance officers in the Ministry of Health and the Ministry of Finance, to ensure that the medical supplies being imported are in line with their contracts.

According to CEO Allen, the three other officers added as persons who could sign customs entries are Danini Contreras (the new director of the Drug Inspectorate, who is herself under fire for allegedly being unqualified for the job), Marietta Enriquez (drug inspector) and Samira Gongora (senior pharmacist at the Central Medical School). However, he told us that none of these persons have begun to sign customs entries.

Amandala was told by a well-connected source that even while she was on sick leave, Anderson continued to sign customs entries, mostly from her home, and we were told that there was no undue delay in the processing of entries. We were advised that when the Chief Pharmacist signs the entries, she does so for the office of the Director of Health Services, Dr. Michael Pitts.

Allen told us that DHS Pitts had arranged for Anderson to sign entries from her home, so there was no need to get the new signatories to process entries.

Allen said that the Government’s response to the PSU’s statement was issued after consultation with the Attorney General’s ministry, and the new measures were instituted after getting advice from Government’s legal advisor in the Ministry of Finance, Gian Ghandi.

However, the PSU has signaled its condemnation of what it describes as “the continuous high-handed behavior” in making decisions related to the Pharmaceutical Unit. One burning issue is the hiring of Danini Contreras, the daughter of Minister Erwin Contreras, a recent graduate with a Bachelor’s degree.

In concluding its statement to the press, the PSU said that it continues to support the Pharmacists Association of Belize, and it calls on the government to address the dispute over Contreras’ hiring.

Allen told us that Contreras has been hired temporarily on a six-month contract, because the ministry wants to put into effect immediate chemical testing measures, and the National Security Council has asked for the establishment of a mini lab to test samples of pharmaceuticals entering Belize for authenticity.

However, the PSU’s press release poses questions over whether the changes being made are as “a deliberate move to weaken the monitoring and regulating of imported pharmaceuticals by placing persons, including Ms. Contreras, who is inexperienced and not qualified as a registered pharmacist, to have oversight of such an important area.”

The PSU said that it has observed that the contention between CEO Allen and Ms. Anderson has mostly been over her insistence to operate under existing rules and regulations which are sometimes disregarded and circumvented.

Although the PSU takes umbrage with the new procedures Allen has put in place, the CEO said that they had to do so, because contractors who supply medical supplies, numbering over 20, had been complaining that Anderson was taking too long to process their entries.

“In order to facilitate and maintain the availability of essential medical supplies at all times, it was thought advisable to authorize more than one officer to certify customs entries. Accordingly, three other pharmacists, in addition to Mrs. Sharon Anderson, were authorized by the Ministry to certify such entries and thus avoid delays,” the Ministry’s release said.

Allen said that the delay has meant higher costs for contractors who have to pay more for storage time at the port.

The Ministry’s release said that it was advised that their action is fully in accordance with the rules and regulations governing the supply of medical supplies.