Public engagement on the ICJ 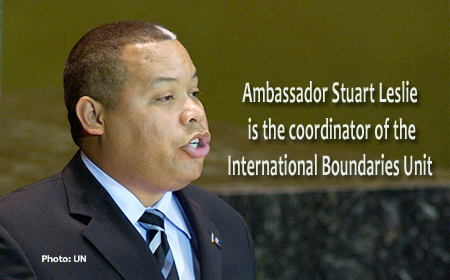 BELIZE CITY, Mon. Jan. 23, 2017–The best way for Belizeans to arm themselves in battling against the territorial differendum with Guatemala is not with guns but with knowledge. Despite the rising demand for greater public education efforts, there is no budget specifically allocated by the Government of Belize to finance public education campaigns.

When the Government launched the campaign in January 2013, it said that, “The objective of the campaign is to educate and inform Belizeans on the Belize-Guatemala territorial differendum, its legal implications, and the pros, cons, and risks of referring the dispute to the ICJ [International Court of Justice] rather than to dictate a ‘yes’ or ‘no’ vote.”

The task of leading the Government’s campaign has been given to a unit within the Ministry of Foreign Affairs. Ambassador Stuart Leslie is the coordinator of that unit, the International Boundaries Unit, which deals with the education campaign for the Belize-Guatemala referendum and issues that relate to the boundaries of Belize, including our boundary with Mexico.

“This issue is an issue that will affect every Belizean, and so to leave it up to a few people or up to the politicians will be a huge mistake,” says Ambassador Stuart Leslie

Furthermore, Belizeans want to know about the risks of going to the ICJ.

“One of the major risks is the whole issue of what you call litigation risk. You don’t know what they are going to say until they say it,” Leslie said.

In public education forums, the presenters convey the arguments from Belize’s lawyers, who have given their expert opinion in the matter. 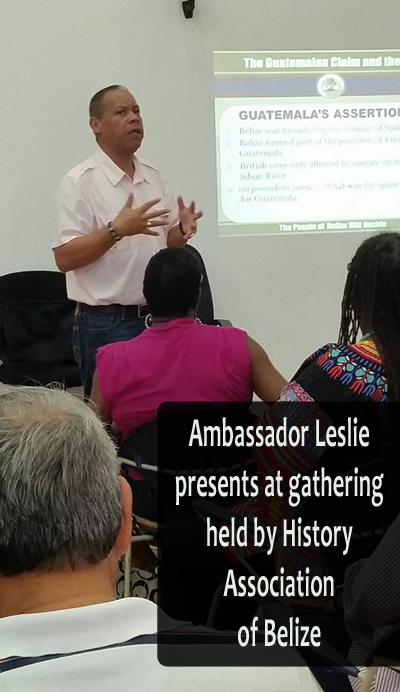 This weekend, they held a session with the History Association of Belize in Belmopan. The prior session was held in December in Toledo, after Guatemala’s military kidnapped Belizean fishermen who were well inside Belizean territory, claiming they were in Guatemalan waters. The matter has sparked a call for Belize to change provisions of the Maritime Areas Act, deemed in some quarters to suggest that Belize has given up rights to a portion of its waters to Guatemala—an assertion which the Government of Belize strongly refutes.

We asked Leslie about the present budget for the education campaign, and he told us that there is none specifically for the campaign, although there is a budget for operating the office. Any special designation for a campaign, then, would have to be a supplementary to the main budget.

Leslie, who has been with the unit since 2012, told us that the public education process started in January 2013, in anticipation of the referenda originally planned for October 6, 2013. However, when the Guatemalans decided in June of 2013 that they would not proceed, the intensity of the campaign was reduced, he said. We note that the initial campaign was set to last only 9 months.

Was there a budget? Leslie said that there was a proposal for the campaign and referendum for a total of BZ$12 million Belize, but the target was not met. What they received, he said, came from the international community and the Government of Belize, and it was “not anywhere near the millions…”

What constituted the campaign prior to Guatemala’s withdrawal from the referendum process? Leslie said that in the initial stages, their team visited schools and talked with students about the issues. They also launched an advertising campaign, and established a social media presence.

What did the Guatemalans do leading up to June 2013? Leslie said that he can recall the production of a YouTube video, but he does not know if it was a part of their public education efforts.

Additionally, the Chief Elections Officer of Belize met with her Guatemalan counterpart in a formal session during the first quarter of 2013.

There seems to be a general public perception that not much is being done by way of public education.

“The criticism is a legitimate criticism,” Leslie admitted.

“My only response to that is that people feel like the responsibility should rest with an office, [but] the education should be by everybody, and so I accept the criticism that enough has not been done but that burden cannot be placed on one party in the Ministry of Foreign Affairs,” Leslie added.

He told us that the Referendum Unit has delivered hundreds of presentations to schools, voluntary organizations, and others who have invited them to present information on the issue.

An item of discussion, he said, has been Assad Shoman’s book on how to end the claim.

“We have had to try to make as many appearances in the media as possible and have worked with the Ministry of Education to try and provide teaching aids…” he added.

“If they say the referendum is in 6 months or one year, everything is ready to go,” he told us.

The unit has worked to train resource facilitators who can speak with Belizeans both in English and Spanish, he said. They also have some trainers who can speak Garifuna, but need more volunteer facilitators, especially those who can communicate in Maya languages.

Leslie said that they have also been meeting with those organizations and institutions which have gone on a campaign against having the matter taken to the International Court of Justice. Among those, he said, are Citizens Organized for Liberty through Action as well as the Belize Progressive Party.

Have we gotten international funding to assist with the campaign in recent years? Leslie told us that initially, through the Organization of American States (OAS) Peace Fund, Belize received some funding to assist with the first printing of resource materials. That was back in 2012. The only new international funding is going to fund the OAS office at the Belize-Guatemala border.

Everybody has a role to play, including Belizeans in the diaspora, Leslie said.

“This issue is an issue that will affect every Belizean, and so to leave it up to a few people or up to the politicians will be a huge mistake,” Ambassador Leslie told us.

Leslie said that the unit also held a series of talks in New York last September and the first thing they noticed was that a lot of people don’t know the issues and don’t know the facts. He said that there is a tremendous lack of information, although those in the diaspora were saying that they are willing to help and asking how they can help.

Leslie underscored that, “Whether Belize will go to the ICJ is entirely in the hands of Belizeans. Belizeans will decide!”

He said that he wants to do his part to ensure that all Belizeans know all the information, so that they can feel confident that they are doing the right thing.

Laws of Belize to be published online

BELIZE CITY, Fri. Dec. 3, 2021-- On Friday, a Bill to amend the Law Revision Act was introduced during a meeting of the House...
Read more
- Advertisment -