By late 1960, it seemed like Kennedy would say anything and do anything to win the election. In private, he felt the strain. A series of televised debates with Nixon was proposed. Jack engaged the services of Max Jacobson, a fashionable but dubious New York physician, and, just before the first debate, took a shot of a drug cocktail called “joy juice.” According to one of Kennedy’s biographers, Jacobson’s recipe “usually included methamphetamines, steroids, calcium, monkey placenta and procaine.”

Kennedy’s lifelong ill health was becoming more difficult to conceal. A retinue of doctors was kept on hand to tend to him. The quantities in which the president took various drugs has not been made fully public, but several of those he took regularly are known to have serious side effects on mental health. The steroid cortisol can cause depression and psychosis. In large quantities, the antidiarrheal medication paregoric causes sedation; the effects of sedation are worsened if paregoric is taken with phenobarbital and other analgesics and sedatives. The sleeping pill Tuinal has subsequently been withdrawn from the market owing to its use as a recreational drug, with physical and psychological side effects. It has been argued that all the decisions Kennedy would make as president were rationally explicable, and could not be ascribed to his drug use. That may be; but it is physiologically impossible that the drugs did not affect his thought processes. The combination of long-standing physical debilities with heavy steroid use would put any patient at very high risk of developing clinical depression, and a high risk of psychotic episodes. The drugs would also have had a sedative effect. Dependency on opiates, barbiturates, and analgesics following long-term use is common. A patient in Kennedy’s condition and undergoing his treatment regimen would require constant medical attention to keep him functioning, both physically and psychologically.

Later, without being returned to Guatemala, I was appointed Ambassador of Guatemala to Great Britain with instructions to renew and revive Guatemala’s claim on Belize (British Honduras), the Guatemalan territory which Great Britain had occupied for over a century.

A day or two after I had put together the column which appeared in our midweek issue (reproduced for today), I realized that there are many Belizeans, younger ones, for whom the column would not have had an impact, because they would not have known how big Ydigoras Fuentes was in the lives of British Hondurans in the later 1950s and early 1960s, and how scared we were of him.

When the Americans overthrew Jacobo Arbenz as president of Guatemala in 1954 and replaced him with Carlos Castillo Armas, the process was not democratic. But when Castillo Armas was assassinated in 1957, Ydigoras Fuentes won an election to become president in 1958. In those Cold War days, the U.S. State Department didn’t mind if you were a dictator and how brutal you were, as long as you were anti-communist, but if you had been democratically elected and you were anti-communist, this was the ideal. Fuentes entered Washington’s good books.

Ydigoras knew more about Belize (British Honduras) than the average Guatemalan president, because he had been the governor of neighboring Petén between 1927 and 1929. He had also been Guatemalan Ambassador to London, and “recovery” of the Belize territory was always a big issue for him. The old timers in Belize claim that Ydigoras had a Belizean sweetheart in Benque, and that was why he tried to cross over from Melchor into the colony one time. He was stopped by a Police Sergeant Neal on our side. Ydigoras was president from 1958 to 1963, and the border incident, I’m almost positive, occurred during his presidency. 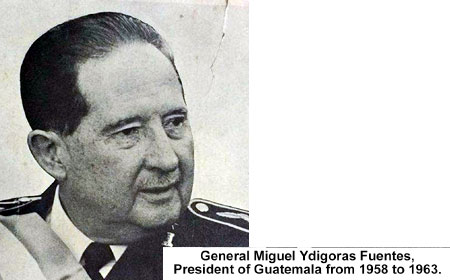 When John F. Kennedy was elected president of the United States in November of 1960, he inherited a Central Intelligence Agency (CIA) plan for an invasion of Fidel Castro’s Cuba by Cuban exiles. Fidel had taken over Cuba in January of 1959, during the American presidency of Dwight D. Eisenhower, and Castro’s various policy decisions, plus the presence in his government of Che Guevara and Fidel’s younger brother, Raul, who were considered communists by the American government, provoked the Eisenhower administration to the point where they planned an invasion. Fuentes provided a large coffee farm, owned by one of his supporters, for the invasion force of Cuban exiles to be trained in Guatemala.

A section of the Guatemalan military, led by Marco Yon Sosa and Luis Turcios Lima, was so angry at what they considered a compromise of Guatemalan nationalism with respect to Ydigoras’ decision to assist the Americans to invade a fellow Latin American nation and neighbor, Cuba, that they led an armed rebellion in November of 1960. There are scholars who consider this Yon Sosa/Turcios Lima uprising as the beginning of the Guatemalan civil war, which did not come to an end until 1996, after 200,000 had been killed.

Both Ydigoras and his son, Ydigoras Laparra, later claimed that John Kennedy and his brother, Bobby, his Attorney General, had promised to support Guatemala in its dispute with the British over Belize in return for Guatemala’s support with the Bay of Pigs invasion of Cuba in April of 1961.

When John Kennedy was assassinated in November of 1963, all we Belizeans were heartbroken. We had absolutely no idea he was selling us out to Ydigoras. So, thinking about it now, that was why Fuentes was so aggressive and threatening: he had American “backative.” (And now, what about Jimmy?)

In 1962, discussions were held between the British and the Guatemalans in Puerto Rico, an American possession in the Caribbean, with respect to the Guatemalan claim to Belize. This was the first time Belizean officials were ever invited to such talks. Those who I am positive represented Belize were Hon. George Price, Hon. Louis Sylvestre, and W. H. Courtenay, who was the Speaker of the House. I believe Hon. Albert Cattouse also attended that conference. No one from the Opposition National Independence Party (NIP) was invited to that Puerto Rico conference. All the invitees, except for Courtenay, an attorney, were People’s United Party (PUP) area representatives who had been elected in March of 1961 in the first national elections held under a new Ministerial constitution.

In the 1961 general elections, the PUP had won all 18 of the seats in the House of Representatives. I believe it was later in 1961 that the NIP Leader, Herbert Fuller, passed away and was succeeded by Mr. Philip Goldson.

I wonder how it was that the NIP was considered Her Majesty’s Loyal Opposition, as I suppose they were, because a Christian Democratic Party (CDP), led by Nicolas Pollard, Sr., had also run in that election and done fairly well. It was for sure that the NIP gained more votes than the CDP, but none had won any seats. Strangely enough, as we look back, Mr. Goldson, who was publishing The Belize Billboard, British Honduras’ leading newspaper at the time, did not run in the 1961 general elections, but he received some kind of official appointment (Senator maybe?) which gave him the opportunity to speak in the National Assembly on the issues of the day.

In the decades since John Kennedy was assassinated, the truth about him has surfaced, and it is now clear that he was not the dashing, heroic figure his family’s wealth had paid for him to be portrayed as in the American media. In order to get JFK elected president, he and his family had cut deals with gangsters, told many lies, and made many enemies. Any number of very powerful people had reasons to wish him dead.

In Belize, however, we cried. We were naïve, childish, and ignorant. We have to do better today, or we will lose The Jewel.

Virginia Echols, an African American lady who has been living and working in Belize for more than a quarter century, and has been active...
Read more
Publisher

The news that broke early this week that Dara Robinson’s feeding program for hungry children is on life support was just one more heartbreaker...
Read more
- Advertisment -