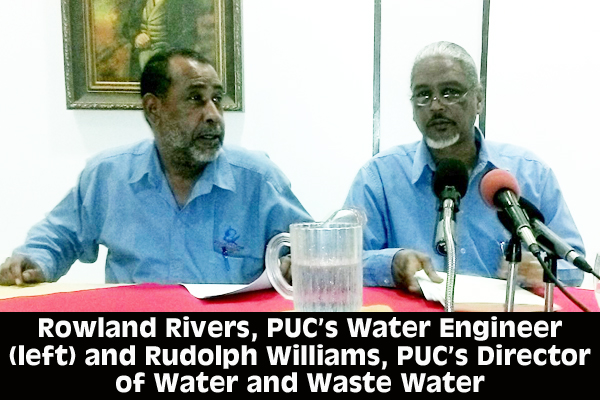 The Public Utilities Commission (PUC) announced at a press conference held at the Radisson Fort George Hotel this afternoon that water rates are due to increase in April by 6.4%—that’s an average increase of $1.04 on every 1,000 gallons a customer consumes, or $6.40 for every $100 worth of water consumed from the Belize Water Services Limited (BWSL).

The new rates would apply until March 31, 2015; but the public has 15 days to comment on the preliminary PUC decision.

On December 31, 2013, BWSL had applied for a rate increase of 16.25%, in line with their business plan which calls for $25.679 million worth of capital investments; however, the PUC said that after reviewing BWSL’s proposal and considering the company’s past performance and its ability to fund investments, the PUC has reduced the capital investments by $11.35 million, to $14.326 million.

Rudolph Williams, the PUC’s director of water and waste water, told the media at today’s press conference that a $4.7 million subvention from the Government of Belize would help to buffer the rate increase. The PUC notes that funds provided by the Government of Belize—the majority owner of the BWSL—are considered capital contribution, and the Government has indicated in writing that it is willing to forgo the recollection of funds provided to BWSL over the next 24 months. Williams said that this should help the BWS with its cash flow situation.

In its proposal for the rate increase, the BWSL had indicated the need for investment funds to accommodate infrastructure works, such as the concreting of streets in Belize City, and the upgrade of the water supply network.

Williams said that some of these infrastructure works were included within the Full Tariff Review Period, and so the newly proposed rates do provide for some of those infrastructure works, and noted that they have adjusted the rate to take into consideration construction works in progress and have accounted for what was in the submissions made to the PUC.

Of note is that the rate increase does not apply to Caye Caulker, which already pays double the national average – at $35 per 1,000 gallons of water. Williams said that any upward adjustment of the Caye Caulker rate would put them close to San Pedro rates, which now stand at $38 per 1,000 paid by residents of San Pedro.

Last week, we reported on a technical note by the Inter-American Development Bank (IDB), which said that only 11% of the country is connected to sewer lines. Williams confirmed that the level of coverage is indeed low, but noted that sewer infrastructure is “very, very expensive,” and if the PUC were to insist that BWSL expand its sewer network at the same rate as the water system, the rates consumers would have to pay would be increased significantly. He said that the PUC has not mandated any serious expansion of the sewer network, although the BWSL has its own proposals for expansion of the sewer system in northern San Pedro, Ambergris Caye.

As for water wastage, though, BWS performs well, when compared with other countries in the region, with non-revenue water due to losses or water theft at just 27%, Williams indicated.

He said that the public has until February 17, 2014, to submit their feedback to the PUC on the proposed rate increase.

Williams noted that if the licensee, the BWS, or an entity representing at least 10% of customers objects in writing, the PUC has to get an independent expert to come in. If BWSL disagrees with the proposed expert, one would be appointed by the International Chamber of Commerce; however, the PUC is not bound to accept the recommendations of the independent expert.

According to Williams, 2014-2015 is the final year of the Full Tariff Review Period (FTRP) for the BWS’s five-year business plan, and the BWS is expected to submit a new 5-year business plan to the PUC around October 2014.

Williams said that BWS can object to this latest PUC decision, and although he cannot say if the company will do so, he believes that the rates are fair and that they provide enough for BWSL to make the necessary investments which the PUC has approved.