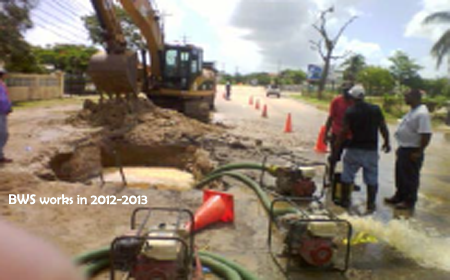 BELIZE CITY–In November 2014, the Belize Water Services (BWS), a utility company whose majority shareholder is the Government of Belize, asked the Public Utilities Commission (PUC) to approve its business plan which proposed total tariff increases of 12.5%: 5% in April 2015 and 7.5% in April 2017.

After considering the BWS’s application, the PUC announced its initial decision today that it would not approve the BWS’s request, but that it would instead approve a nominal 2% tariff increase, which, along with an increase in water usage from 10 billion gallons to 12 billion gallons over the next five years, should be enough to secure the company $30 million more in revenues.

What the PUC decision means for BWS’s 44,000 customers is that their water bills would increase this April by about 2%, if the PUC’s initial decision remains unchanged. Water rates will continue to be the highest in San Pedro and Caye Caulker, where consumers pay more than double the rate of mainland customers.

The company, as well as interested parties representing users who account for at least 10% of water consumption in the previous year, have until the close of the business day on Friday, January 23, 2015 to give their feedback to the PUC.

BWS’s Business Plan cited as much as $246 million in investments, which were not detailed. The company had reduced that estimate to $108.6 million, which it proposed to finance with an injection of $30.1 million from the company, $26.4 million in loans, and $52.1 million in contributed capital, primarily public funds channeled to the company from the Government of Belize.

PUC chairman John Avery said that the PUC reduced the figure for proposed investments from $108.6 million to $50 million, in light of BWS’s performance over the last five years. He said that the PUC was also not certain about the feasibility of some of the projects which BWS proposed, so the PUC could not include those among the projects for which BWS would be allowed to recoup monies from consumers.

Avery explained that the priority is to expand the water distribution system to link up customers who need water supply. The increase in production driven by this expansion would mean more sales, which underscores the need for more production capacity and storage to meet the needs of the growing customer base.

He explained that the PUC’s aim is to set a rate that would approximate what BWS needs to perform for the entire five-year period, if the forecast were to hold true, but the PUC would make annual rate adjustments based on the company’s actual performance to try and keep the company on track.

All in all, the new proposed tariffs should net BWS roughly $210 million in revenues between 2015 and 2020, roughly 17% more than the revenues approved for the concluding full tariff review period.

The average water rate would be $17.49 per 1,000 gallons, slightly lower than the $17.57 approved for the current period. However, Avery noted that currently, the effective water rate is more like $17.15. He said that the PUC, at the next annual review, will determine whether any further adjustments need to be made to the water rates.

For the last full tariff review period which began 2010, BWS had proposed investments of $125 million, but the PUC reduced it to $80 million. An independent expert was contracted to review the matter in light of BWS’s objection, but that expert recommended an even lower figure of $40.4 million over the 5-year period. Avery said that BWS’s investments for the first four years total $31.9 million. This, he said, is in line with the recommendation from the independent expert. BWS’s contribution towards this has totaled $10.3 million.

With the increase in investments, BWS would receive a higher rate of return, calculated at 8% of what the PUC deems to be the regulated asset value (RAV). If the current decision holds, the RAV would increase by $60.4 million, which would net the company $5.6 million in return on those assets over the full tariff review period.

Over the same period, the company would be allowed to spend roughly $130 million on operational expenses. Avery said that the company is given incentives to keep this figure in line with the approved figure, but it is financially penalized if it does not.

“We do, in fact, keep up with investments being made. We don’t always agree with the prioritization. We certainly do not agree with a lot of the operational expenditure that BWS incurs,” Avery said.

BWS says that it serves over 233,000 consumers, which represents approximately 70% of the country’s population.

Rural dwellers in places such as remote villages are supplied with water through rudimentary systems established by the Government of Belize.

View a copy of BWS’s business plan by clicking HERE.