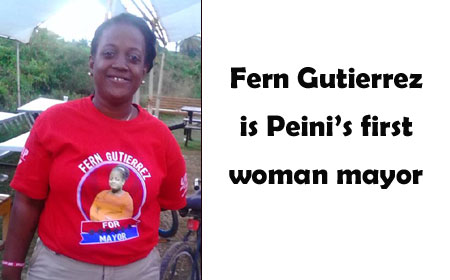 PUNTA GORDA, Wed. Mar. 4, 2015–The voting process got off to a slow but peaceful start at St. Peter Claver R.C. School and Punta Gorda Methodist School at 7:00 a.m. on Wednesday, March 4, and by the time the polls closed at 6:00 p.m. 2,242 voters, 62% of those registered in that municipality had participated in the poll, returning Fern Gutierrez, who served as councilor from 2012 to 2015, as the only elected candidate for the United Democratic Party (UDP), and also installing her as the town’s new mayor – the first woman to hold that post in the municipality.

Gutierrez will be joined by a full slate of UDP councilors – returning that municipality, which had been held by the UDP for two consecutive terms (2006-2009 and 2009-2012), to the ruling party.

Voters told us that in Punta Gorda (Peini), voting is usually slow in the morning, but the pace picks up after midday.

Punta Gorda, which had the most candidates in the municipal elections, numbering 24, saw a 3-way mayoral race, with Gutierrez and Wil Maheia of the People’s National Party (PNP) challenging the incumbent mayor, Anthony Fuentes of the Opposition People’s United Party (PUP).

When dual elections were held in 2012, voters of that municipality booted the UDP from office after having given them two consecutive terms. However, Gutierrez was the only UDP to be elected to office that year.

This time around, she made an impassioned bid for the mayoral seat, leading a slate of 6 councilor candidates to victory.

Gutierrez had told Amandala that was she was confident of being voted into office because voters believe that her team could bring development to Peini, and because of the campaign work they had done and the fact that they had organized to bring out their voters on election day.

Anthony Fuentes had said that he could “put his head on the block” that if the PUP were in control of the central government, he could have done much more for his town during his term of office, but despite the odds, he said, he would be reelected. The PUP machinery was also working hard to bring out their voters.

Raymundo Noralez, who was a councilor for the PUP, had told us earlier that he was confident that they would be returned to office. Noralez said that they were undertaking many projects to help the town, even against the odds. He said that the people would reelect them to continue the development.

On the other hand, Alphane Avila, councilor candidate for the UDP, had told us that she was confident that they would win and form the new town council. She told us that they were bringing out their people and expected a large number of voters in the final count.

Wil Maheia was also confident. He told us that he expected to win because the people of Punta Gorda are ready for a change. Maheia said that after Wednesday, his party, the People’s National Party – PNP, would no longer be “the third party.”

Maheia was also expecting a large voter turnout after midday.

Joseph Martinez, a voter, who works as a prosecutor at the PG Municipal Court, told Amandala that 40% of the votes would go to the UDP and 60% would be split between the PUP and the PNP, with the PNP doing better than the PUP.

Morgan told us that he would challenge the outcome of the elections, because voters should have been given two ballots: one for the mayoral race, since there is a direct vote for mayor, and the other for councilors – which is a separate race.

Morgan also complained that there were people going around paying $100 to electors for their votes.

Danny Valerio of the PNP told us that people were ready for a change, after having tried the two parties: the PUP and the UDP.

Whereas the PNP was looking even better than the PUP in the early part of the vote count, it did not fare off as well as that party had expected, despite assertions from many voters that they would elect the PNP as the next administration for the Punta Gorda Town Council.

The voters did decide on change, but that change has meant that the UDP will now take over the reins from the PUP.